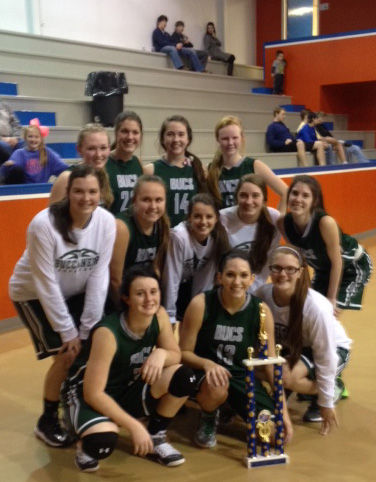 Bowling Green’s girls finished with a 3-0 record and captured the Columbia Academy Tournament held Dec. 27, 29 and 30.

The girls won the title game over the host school, 46-35, Tuesday.

Ashley Foret led Bowling Green’s balanced scoring attack with 12 points on 5-of-10 shooting. She also grabbed six rebounds to go with two assists and two steals. Kristina Jerrell recorded 10 points on four of seven from the field and a steal.

Jerrell, who recorded 14 points on 5-of-7 field goals, and knocked down four of seven from 3-point range, led the Lady Bucs in scoring, as 10 players tallied.

Foret finished with 12 points, on 4-of-7 shooting. She also posted three assists and three steals.

Waskom totaled eight points on three of four from the field to go with five rebounds and six steals.

Peyton Stogner and Watson both added three in the victory, and Caliee Fruge chipped in with two.

The Lady Bucs had 18 steals and 12 offensive rebounds as a team.

The second contest was a 72-44 victory over Parklane Monday.

Waskom and Jerrell both had solid games.

Waskom led the team with 21 points on 9-of-10 shooting. She also finished with four rebounds, three assists and two steals.

Bowling Green competed in the JP Tournament Friday and Saturday.

The Lady Bucs are back in action Jan. 9 with a road trip to Centreville.