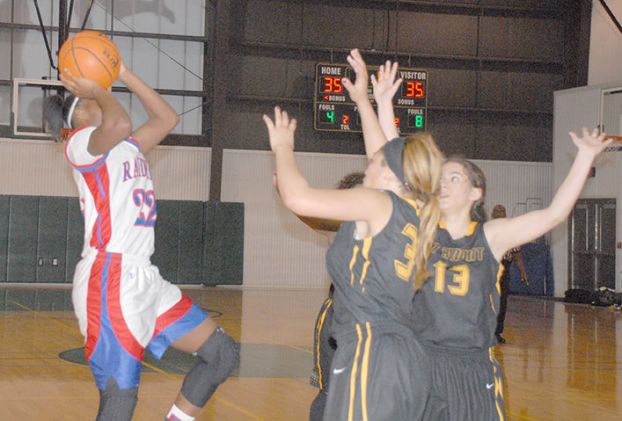 Pine won a thriller and Mt. Hermon suffered a loss on the first day of the 2014 Hannan Hustle Tournament Saturday.

Pine was victorious over St. Amant, 37-35, in overtime at the Coquille Parks and Recreation Gym.

The Lady Raiders had a 35-32 lead late in the four-minute overtime period.

The Lady Gators banked in a 3-pointer from the top of the key with seven seconds left to tie things at 35-35.

It appeared the game was headed to double overtime, but Pine had other ideas.

Breyanna Brown rushed the ball up the floor after taking the inbounds pass.

Brown attempted a shot from inside of the 3-point arc with time expiring and nailed it.

The buzzer sounded and Pine had the 37-35 victory over St. Amant.

Brown spoke about the winning shot.

“I had to have confidence,” Brown said. “When she gave me the ball, I just shot it and it went in.”

The contest was a defensive game.

Both teams played a tough zone defense, which limited the scoring.

Both teams had opportunities to go in front down the stretch and potenitally win. Neither could capitalize.

The game went to overtime with the score tied at 30-30.

Brown gave the Lady Raiders a 33-30 advantage by hitting a 3-pointer at the 2:35 mark to go in the overtime period.

St. Amant trimmed it to one 28 seconds later.

Brown converted both ends of a 1-and-1 with 19.1 seconds remaining.

That set up an exciting finish, as the Lady Raiders pulled out the win.

Brown led Pine with 13 points. Laken Breedlove was next with 10. Morgan Thomas finished with eight and Kaylee Turnage and Chelsey Turnage both added two.

Mt. Hermon was unable win its game. The Lady Jackets suffered a 52-25 setback to Fontainebleau in the tournament’s first game at Hannan.

Kailee Hughes and Angelica Anthony both had five for Mt. Hermon.