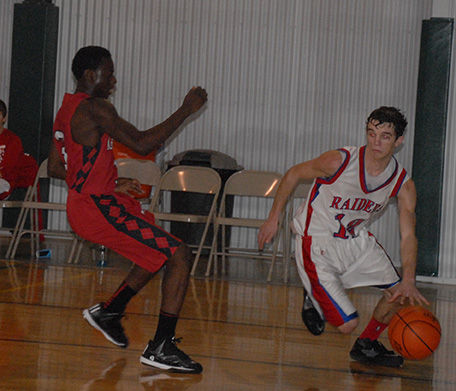 Pine advanced to the finals of the 2014 Hannan Hustle Monday while Mt. Hermon lost and Bogalusa posted a 1-1 record.

Pine made the finals by playing another close game with Loranger and pulling this one out, 62-59, in overtime at the Coquille Parks and Recreation Gym.

Loranger defeated Pine, 56-55, in the clubs’ last meeting at Pine Dec. 9 on a free throw after a foul as time expired.

One of the things that hurt Pine was Loranger’s ability to grab offensive rebounds.

“They’re great jumpers,” Pine coach Eddie Vaughn said. “They’ve got two solid bodies that are not that tall. They’re bigger than us. They’re not that tall, but they jump well. That just gives us fits. I thought at times we got our fair share of them. The only thing is, when they grab one and put it back and the game’s already close, that just scares the heck out of you.”

With the game knotted, 57-57, Pine scored what turned out to be the winning points on a field goal by Jarron Hughes and two free throws from Jamie Adcox with a minute left.

Loranger had a layup to trim it to two with 41 seconds to go, but Pine hung on for the victory.

Hughes, Adcox and Jordan Phelps all finished with six, Ty Galloway posted five, with Trey Cooper at four, and Lowell Pittman added one.

Pine played the host school for the title after Tuesday’s press time.

Mt. Hermon lost to Archbishop Hannan for a chance to go to the finals, 69-58.

Jessie Pouncey and Corterio Williams both had 12 points for Mt. Hermon. Joseph Magee was also in double figures with 10, and Gerald Bunch added six.

Bogalusa was victorious over French Settlement, 48-43, at Archbishop Hannan.

The difference in the game was free throws.

“In recent games, we’ve lost by free throws,” Bogalusa’s Kenyatta Scott said. “So at practice, coach told us to work hard, stay out at practice, shoot 100 free throws if we can. I guess we had a good free throw shooting game.”

The Lions had a rough game from the line, hitting just six of their 22 free throws (27.2 percent).

French Settlement led 27-21 at halftime. The offenses came out strong in the third quarter. Bogalusa had the deficit down to 31-28 with 6:21 left in the third but the defenses stepped up. The next points weren’t scored until the 2:12 mark when Landon Thomassie, who scored eight, hit for two, ending the Lions’ 5:06 scoring drought.

Bogalusa was back on the board with 1:07 remaining with Billy Mingo finding Ronald McMorris for a layup to end the Lumberjacks’ 5:14 scoring drought. It was 33-30. Mingo had nine and

French Settlement’s Jarrett Lobell made a layup with 55 seconds left and the Lions led 35-30 after three. He had 11.

Bogalusa came back strong, led by Kenyatta Scott, who knocked down three big 3-pointers and finished with 15 points.

French Settlement added two more with Thomassie hitting a field goal with 3:55 on the clock, but Scott was there once again with another trey to make it a one-point game.

Bogalusa went into the lead when Kenneth Robertson hit Tyran Holloway for two, and it was 40-39 with 3:19 left.

After the Lions threw the ensuing inbounds out of bounds, Bogalusa capitalized on another three by Scott, extending the lead to 43-39.

“I just tried to make the shots,” Scott said. “We were down. Coach told us to play D and if we get an open shot, shoot, so I was shooting.”

Cody Cambre, who posted 12, split from the line. Lobell got fouled and hit a shot, but couldn’t convert the 3-point play. Bogalusa still had the lead, but it was only 43-42 at the 1:43 mark.

French Settlement got possession still down 43-42 with a minute remaining, but missed. Scott got fouled and hit both ends of a 1-and-1.

French Settlement got no closer in the Lumberjacks’ 48-43 victory.

The Lumberjacks’ second game Monday didn’t go as well for them.

Bogalusa lost to Ponchatoula 57-51 at Hannan.

The Lumberjacks trailed 29-20 at halftime.

Scott led the way with 16 points, while Mingo posted 12.