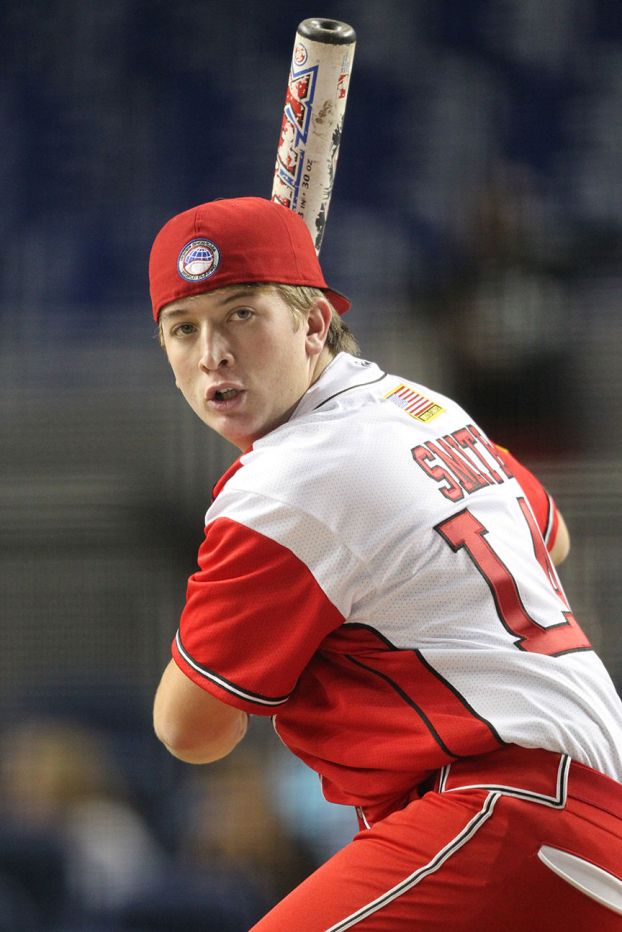 Mt. Hermon’s Devin Smith is heading to Florida for competition.

The senior is competing in the ninth annual Power Showcase Dec. 30 at Marlins Park, the home of the Miami Marlins.

The finals are set for Jan. 2.

This is the second consecutive year Smith is going to the home run derby.

“It was a great experience last year,” Smith said. “It gave me great exposure. I had never played on a stage like that. I guess I was kind of shell shocked at first, but I’m looking forward to this year.”

Smith was unable to homer at Marlins Park, which is a pretty big ballpark.

Smith said he hit three or four off of the centerfield wall.

He said last year’s experience will help him a lot.

“It got me ready for this year. I understand how big the park is. It gave me 365 days to prepare,” Smith said.

Each player gets 20 outs. They get five outs using a wooden bat and 15 with metal.

The top three finalists advance to the finals.

Smith qualified by being invited back from last year. He will be in the Featured Division this year.

You can track Smith’s progress at www.powershowcase.com.

The event also has a community outreach initiative called Home Runs That Help. Participants partner with a local baseball fan who is suffering from a life-threatening medical condition, disability or special need.

Players can raise financial contributions toward their cause. The first home run hit by the Power Showcase participant is signed and labeled with the distance the ball traveled and is later presented to the partner.

On the 15th out, the players receive a gold money ball. If they hit it out, it multiplies the financial contributions by five.

Smith is hitting for Franklinton resident Macy Gueldner, a 4-year old, who was diagnosed with acute lymphoblastic Leukemia in October of 2013.

When Smith returns home, he will present the ball to Macy.

“Macy, she’s a great little girl,” Smith said. “She inspires me a lot. She doesn’t give up even though things can get a bad as they do for her. The fight in her is amazing.”

On Jan. 2, Smith is playing in the Power Showcase All-World/All-American Baseball Classic at Marlins Park featuring the West against the East.

Smith is playing for the West.

Last season, Smith played for Mt. Hermon School and in travel ball, he competed for the Louisiana All-Stars 18U Team.

He played third base and pitched for his travel ball team.

After he’s done in Miami, Smith is heading to Fort Myers, Fla., for a Perfect Game Showcase.

“That’s going to be a huge showcase,” Smith said. “There will be a lot of pro and college scouts there. It’s going to give me good exposure to scouts and hopefully open up new opportunities for me.”