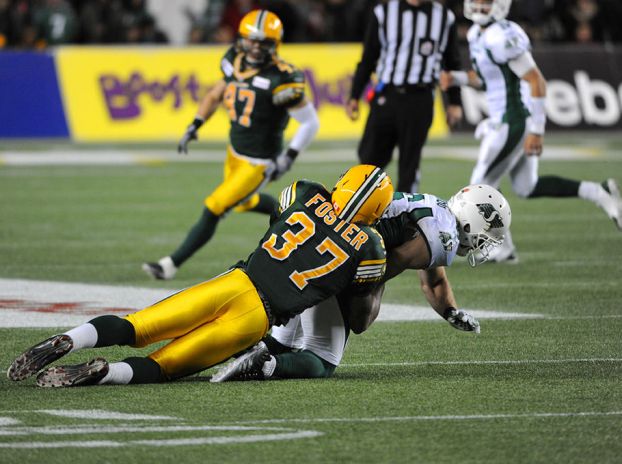 Otha Foster III completed his first season in the Canadian Football League and was just one game away from reaching the Grey Cup title game.

“Last year, I think they only won like four games,” Foster said. “They brought in coach (Chris) Jones and his staff this year. We started out really good at 7-0. It was a good season for our fans and players, especially for those players who were there last year. We ended the season as one of the best secondaries in the league, and we had one of the best defenses in the league. We ended the season with the second best record in the CFL.”

Edmonton finished with a 12-6 mark this season and second in the West Division behind Calgary (15-3).

Foster, a 2006 Varnado High School graduate, said the best moment this year was the playoff win.

“That was a big moment,” Foster said. “Just being back on the field was big for me. I tried to soak up every moment.”

Foster went to the CFL after basically sitting out last season. Foster signed as an undrafted free agent last season with the Kansas City Chiefs but was released.

After being released, he said he tried to wait it out for calls from other teams but ended up going back to the University of West Alabama and took classes toward graduation. He said he’s just an internship away from graduating. His major will be education.

The Toronto Argonauts had his rights if he decided to go the CFL route, which he did. He had worked out for Jones, who was Toronto’s defensive coordinator at the time, but this year became Edmonton’s head coach. Foster was traded to Edmonton where he played this year.

This season, Foster played in 16 games, all starts, and made 46 tackles with one sack. He tallied an interception he returned for 12 yards and he recovered a fumble, which he brought back 57 yards for a touchdown.

“Going into the season, I didn’t know what to expect,” Foster said. “It’s a different game, but in the end, it’s see ball, catch ball. They have what they call a waggle where the receiver runs towards the line of scrimmage before the snap and is going full speed when the ball is snapped. The field is also wider. There were other adjustments like multiple men in motion, but this was a good learning experience for me. I also had fun playing this year.”

Foster said the fans were terrific all season.

“We had a big crowd at every game,” Foster said. “Playing in front of big crowds, who are loud like that, you just take a moment before a play and soak that moment up.”

“We’re going to build on the success we had this year, and try to take one more step, get to the Grey Cup and try to win it next year,” Foster said. “I feel like this year made me a better player all of the way around, especially playing that many games in one season. Being a rookie in the CFL this year will help me in the CFL next year.”

Mt. Hermon’s Devin Smith is heading to Florida for competition. The senior is competing in the ninth annual Power Showcase... read more