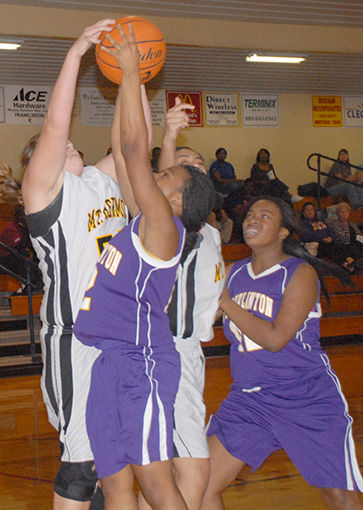 Five Washington Parish basketball teams are heading to Covington for the 2014 Archbishop Hannan Hustle Tournament, which is a boys and girls event.

Pine and Mt. Hermon’s boys and girls along with Bogalusa’s boys are competing in the tournament, which runs Saturday, Monday and Tuesday, at Archbishop Hannan High and Coquille Parks and Recreation.

Coquille is next to Hannan.

The boys and girls’ tournament features eight teams, and each club with play three contests.

Four boys games are on tap for tomorrow, with three of them featuring a local school.

The tournament gets under way at 12:30 p.m. in Coquille’s Gym, as Pine takes on Ponchatoula.

That game is followed by Northlake Christian School and Loranger.

Mt. Hermon battles French Settlement at 3:30 p.m. at Coquille, and Bogalusa faces the host school at 5 p.m. at Hannan.

The winning teams go against each other at 3:30 p.m. Monday, while the losing squads battle Monday at 11 a.m.

Switching to the girls’ side, there are also four games set for Saturday. The first game has Mt. Hermon battling Fontainebleau in Hannan’s gym at 11 a.m.

The game is followed by St. Katherine Drexel facing French Settlement in the school’s gym.

The next contest is Pine going against St. Amant at 2 p.m. at Coquille, and the day wraps up with the host school playing Pearl River at Hannan.

The winning and losing teams of the Pine and St. Amant match up and the Mt. Hermon and Fontainebleau match up play each other.

The winning teams are slated for a contest Monday afternoon at 2 p.m. in Hannan’s gym.

The losing squads play Monday at 3:30 p.m. in Coquille’s gym.

The same format applies for the winning and losing teams for the Hannan-Pearl River and French Settlement-St. Katherine Drexel games.

The winning teams from those contests battle at 5 p.m. Monday at Hannan, while the losing teams tip off at 12:30 p.m. Monday in Hannan’s gym.

Following the conclusion of the tournament all five teams’ next games are on the road.

Pine’s boys’ and girls’ next games are also on the road. They are playing Jewel Sumner Jan. 6.

Mt. Hermon’s boys’ and girls’ next contest is also Jan. 6.

They are traveling to play against Springfield.