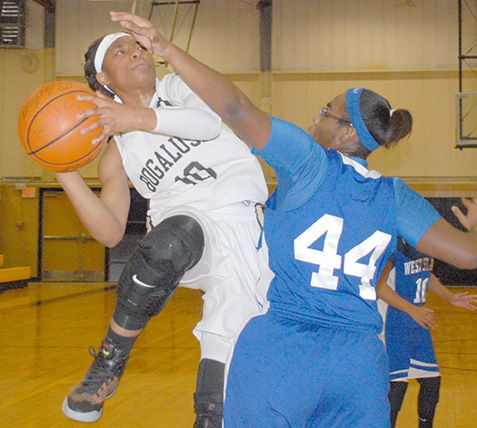 Bogalusa’s JaMaya Mingo-Young came through under pressure for the Lady Jacks, knocking down three free throws with no time on the clock in a 54-53 victory over West St. John at home Monday.

After a West St. John timeout, Bogalusa got the ball down the floor and had two passes knocked out of bounds by the Lady Rams with 5.4 and 4.1 seconds remaining. The Lady Jacks called timeout after both.

Mingo-Young, who finished with a game-high 35 points, dribbled to the left wing and attempted a three but got fouled. With the clock showing 0.0 seconds, the eighth-grader stepped to the line for three free throws with her club down two.

With the game on the line and needing to hit two to send the contest to overtime and three to win, Mingo-Young went to the free-throw line and knocked down all three shots for the victory.

Mingo-Young talked about the play that led to the foul.

“My teammates did a good job of setting the screen for me to get open,” Mingo-Young said. “I just got fouled and hit the free throws.”

West St. John took control of the game early. The Lady Rams jumped out to a 6-0 lead on treys by Jaquanna Hunter and Nicholas. They extended the lead to 11-2 with 4:03 to go in the first quarter, but the Lady Jacks began to come back.

Mingo-Young came up with a steal and a fast break layup 30 seconds later. Mingo then drove for a layup, trimming the Lady Rams’ lead to 13-12 after one.

West St. John started the second quarter with possession, but Mingo-Young made another steal, missed two close shots, grabbed both rebounds and hit the third, giving Bogalusa its first lead at 14-13.

The game stayed close for the rest of the contest, as neither team had a lead bigger than five points.

Mingo-Young scored the first points of the second half with 5:44 to go in the third period for a 31-26 BHS lead.

But down 34-30 at the 4:01 mark, West St. John finished the quarter with seven unanswered.

Nicholas hit for two with 3:10 remaining. She then came up with a steal in the backcourt and converted the layup to tie the game.

Mychelle Lumar, who posted seven, split from the line and West St. John was up, 35-34.

Trench was good for two with 13 seconds left, and West St. John was in front, 37-34, after three, and this one was far from over.

“She came in with a lot of tenacity and a lot of focus,” Bogalusa coach Kim Carriere said. “She was ready to play on both ends of the floor. We played good team defense because they have a great player in No. 11 (Trench) as well. We did a good job of everybody stepping up, rotating on defense. JaMaya stepped up at the end and took over on defense to help out.”

The rest of the Lady Jacks’ scoring included two each from D’Sha Rankins, Jasmine May and Kiera Walker and one point by Dezyriah Rankins.

Bogalusa is back in action Dec. 30 on the road against the Franklinton Lady Demons.

Pine’s Rachael Williams was named an all-district honorable mention for the 3-IV league. Williams was the only senior for the... read more