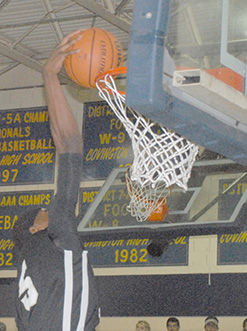 Bogalusa nearly made a 21-point comeback but fell short in a 75-67 loss to Covington on the road Monday in an up-tempo contest.

The teams played pretty much even through the first half of the first quarter.

Jay Earlycutt, who scored 13 points, converted a 3-point play with 3:20 remaining in the first quarter.

Kenneth Robertson hit a jumper for Bogalusa to stop the run with 6:26 left in the first half but added five straight on a trey and a 2-pointer from Diego Smith. Covington had a 33-12 advantage with just under six minutes left. It was the Lions’ biggest lead of the night.

But Bogalusa proved the team had no quit in it and battled back. Trailing, 39-20, with 3:17 on the first-half clock, the Lumberjacks went on an 11-2 run and were right back in the game.

The run began with Kenyatta Scott knocking down a 3-pointer from the right wing to make it 39-23, but a loose ball foul on Covington after the shot gave the Lumberjacks possession.

Bogalusa took advantage. The Lumberjacks went right back to Scott, who had 12 points, and he was good once again, this time from the top of the key. The Lumberjacks’ deficit was down to 13 at 39-26 with 2:34 to go in the first half.

Nick Cyprian was good on a layup for Covington to push the margin back to 15, but the Lumberjacks put up five in a row. Billy Mingo knocked down a jumper and Ronald McMorris nailed a 3-pointer. What was a 21-point lead was only 41-31 with 1:37 to go in the opening half.

Covington added three to the scoring before halftime and led, 44-31, at the break.

Bogalusa continued to battle hard in the third quarter, but found itself down, 57-39, with 2:43 remaining in the period.

Once again, the Lumberjacks responded and went on an 8-0 run to close the quarter.

Desean Crumedy knocked down two free throws before Tyran Holloway was good on a layup. McMorris, who recorded 13 points with three rebounds, two assists and a steal, scored the next four and the lead was down to 57-47 after three.

Covington got its advantage back to 12 a couple of times at the beginning of the final period, but trailing, 61-49, the Lumberjacks had another run in them.

Robertson, who posted 22 points with two rebounds and two steals, was good on two free throws with 6:50 left. The foul that sent him to the line was CHS’ 10th team foul, meaning the double bonus for Bogalusa the rest of the way.

Robertson went back to the line 53 seconds later and split the shots.

McMorris was good on a layup after a steal before Holloway hit a layup to make it 61-56.

Crumedy brought the ‘Jacks closer with two free throws after an offensive rebound. Bogalusa was down just 61-58. the closest the game had been since it was 9-6 in the first quarter. George Brister hit a layup for Covington to make it 63-58, but the Lumberjacks put up three in a row. Robertson hit 1 of 2 from the line, and Mingo picked up second-chance points after grabbing an offensive rebound and hitting the put back. All of a sudden, it was 63-61.

But that was the closes Bogalusa was able to get.

The Lions finished things up with a 12-6 run to claim the eight-point win.

The things that hurt Bogalusa in the loss were turnovers, missed layups and free throw shooting.

Bogalusa finished 19 of 32 (59.3 percent) from the line. The Lumberjacks had rough shooting from the line through the first three quarters, going 8 of 17 (47 percent), but they picked it up in the fourth quarter, finishing 11 of 15 (73.3 percent) in the period. The 11 for 15 helped them continually close the gap.

“They did play a big factor in the momentum,” Bogalusa coach Strafford Goins said. “We’d get the momentum periodically, but then lose it. I think the biggest thing is our fundamentals, missing free throws, missing layups under the goal and not capitalizing on golden opportunities was what really hurt us.”