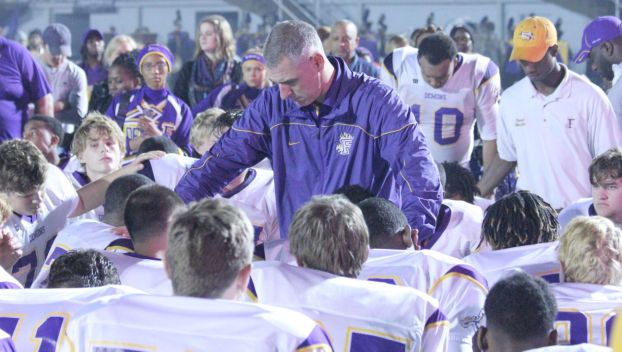 Franklinton’s quest to make it back to the Mercedes-Benz Superdome for the state finals came up one win short Friday night in a 32-8 loss to Neville in the Class 4A semifinals.

The Demons had trouble containing Kavontae Turpin, who is Neville’s leading rusher and one of the Tigers’ top receivers. He finished with 134 rushing yards on 10 carries and two touchdowns and 84 receiving yards on four receptions with a score.

The Demons had a golden opportunity to get on the board off of the opening kickoff.

Franklinton won the toss and elected to defer. Neville fumbled the kickoff return. The Demons recovered then fumbled it out of bounds at Neville’s 34, where FHS began on offense.

Franklinton moved the ball to Neville’s 17, but on fourth-and-5, Michael Wilson’s scramble came up three yards short, meaning a turnover on downs.

“It was tough,” Franklinton coach Shane Smith said. “You’ve got to capitalize there. I’ve got to do a better job. That’s the bottom line of getting the plays in and giving our kids an opportunity to execute in that situation.”

Things began to go south for the Demons from there, as Neville scored on its next three possessions.

After the turnover on downs, the Tigers drove 72 yards in 13 plays, while using 6:12, and scored on a 28-yard field goal by Curphey Hardin. Neville led, 3-0, with 2:57 remaining in the opening period.

Franklinton punted on its next possession, and on the first play, Neville scored again from its 17. Turpin took the handoff, got into the open, broke tackle around Franklinton’s 30 and went the distance, 83 yards and it was 10-0 with 23.4 seconds left after Hardin’s extra point.

Franklinton was forced to punt on its following possession. A high snap led to Neville taking over at Franklinton’s 29.

The Tigers scored in one play. J.T Jackson dropped back to pass, pumped faked and threw to a wide-open Turpin for a touchdown. Hardin’s PAT split the uprights to make it 17-0 at halftime.

Franklinton got back in the game at the beginning of the second half. The Demons took the second half kickoff 80 yards on 14 plays and used up 5:17. Wilson capped the scoring drive by sneaking in from the 1. The Demons set up for the PAT, but decided to go for two after Neville jumped offsides. Renaz Wilson, who ran for 110 yards, got the call and tallied the 2-point conversion, trimming the lead to 17-8.

But Neville responded with a 65-yard drive, which ended with Turpin scoring on a two-yard run. Quintin Guice ran in for 2 and the margin was back to 17 at 25-8.

Neville scored the game’s final touchdown with 5:43 on the clock on a Juquarius Emerson two-yard run. Hardin’s PAT was good for the 32-8 final.

Third-seeded Franklinton finishes with a 12-2 record. The loss Friday night snapped the Demons’ 10-game winning streak. Their last loss before Friday was Sept. 19 against Brother Martin.

Over the past two years, the Demons are 22-5 and every team they’ve lost to in that time period has reached at least the semifinals.

Last year’s losses were against Edna Karr and East Jefferson, which played for the Class 4A state title last season with East Jefferson winning. Covington was a Class 5A state semifinalist team last year.

This year’s losses came to Brother Martin and Neville.

Brother Martin made the semifinals of the Division I playoffs, but lost to state runner-up John Curtis. Second-seeded Neville (12-1), which has won 11 straight, plays fifth-seeded Warren Easton for the state title in the Mercedes-Benz Superdome at 3:30 p.m. Saturday.

“They’re a hard-nosed group of kids that worked extremely hard,” Smith said. “They’ve had a successful year. I couldn’t be prouder of them. They brought this program back to where it should be.”

Magee said it was a great team.

“I wouldn’t play with anybody else,” Magee said.