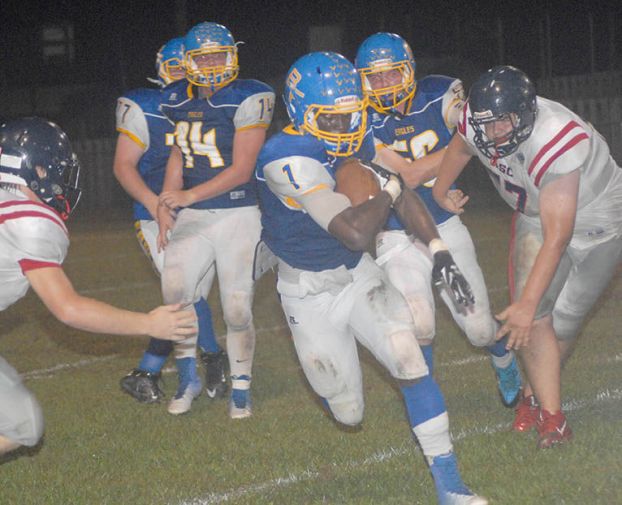 The contest is a group of seniors from Classes A-AAA and eight-man football. It features a battle of the North against the South Friday afternoon at 2 p.m. at Jackson Prep.

Taylor and Holden are both on the South.

Taylor put a stellar senior season together for Ben’s Ford.

Taylor said this was one of the things he wanted to do as a senior.

“Since I’ve been here, it’s a moment I’ve been waiting on,” Taylor said. “It was one of my goals. Making it just shows that all of the hard work I put in and the dedication to the weight room and whatever I had to do to get where I’m at now. I was never satisfied with just being good enough. I always wanted to be better, so it made me work harder, and I think that played a big part in getting me to the all-star game.”

Taylor credited his coaches for molding him into the player he is now.

When asked to talk about his running style, Taylor said he believes he is a balanced back with a little combination of speed and power.

Holden said Taylor was a special player for the Eagles this season.

“He did an outstanding job at tailback,” Holden said. “Aaron was the type of back that we could pound it with him. He was the type of back that he could take it the distance for you. He was just a special kid at tailback. He did some good things this year. I was excited to see him rush for over 1,000 yards. Him doing the things he did at tailback opened up other areas for our offense. He contributed a great deal to our offense.”

Holden made the all-star team as an assistant coach.

This season, Holden guided Ben’s Ford to a historic season. The Eagles football program made the playoffs for the first time ever.

Ben’s Ford ended up losing in the first round of the Class AA playoffs to Silliman Institute, 40-0, and finished with a 6-5 record.

Silliman ended up falling in the next round to Adams County Christian School.

Holden said it’s a privilege to be on the all-star coaching staff.

“I’m honored I was able to be selected as one of the all-star coaches,” Holden said. “I’ve been around the MAIS for several years now as an assistant. I’m flattered and blessed I was chosen as one of the coaches.”

The South’s head coach is Parklane Academy’s Mike Powell. The rest of the assistants are Silliman’s T.J. Davis and University of Academy of Cenla’s Vic Williams.

University Academy made the title game of the Class A postseason before falling to Newton.

One of the exciting things for Holden is that he said Powell coached him in high school at Franklinton.

“Coach Powell spent four years at Franklinton and that was the four years I was in high school,” Holden said.

“He was my offensive line coach. A lot of the stuff I use today is stuff he did with us back then. It’s a huge honor to be able to coach with him on his staff in this game.”

Davis’ Wildcats are in Ben’s Ford’s district, and Holden said Davis has taken some outstanding strides with that program.

Holden added that when Davis took over at Silliman, the football team had been struggling and now is one of the top contenders year-in and year-out in AA

Holden said he personally doesn’t know coach Williams very well but said he does know Cenla played for a state championship this year in single-A.

“Evidently, he’s doing things right. He made it to the state championship and didn’t win, got beat by Newton, but that’s a huge accomplishment just to get there,” Holden said. “