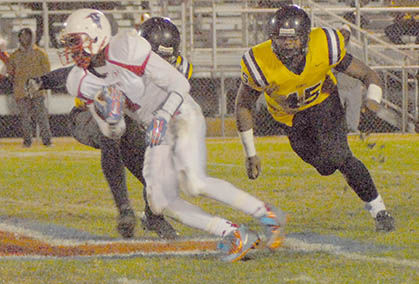 Raiders fall to Kinder in playoffs

The Kinder Yellow Jackets did what they do best  — play smash mouth football — and it paid off for them in the form of a 37-6 win over Pine in the regional round of the Class 2A playoffs held Nov. 21.

With the win, the Yellow Jackets (12-0) will travel to No. 7 Springfield in the quarterfinals. It is the fourth consecutive year that they have reached the final eight.

“This is awesome,” Kinder head coach Bret Fuselier said. “Like I told the kids, anytime you are playing on Thanksgiving week, that’s what high school football is all about. Great job by our guys because they put in so much work week in and week out and they executed the game plan perfectly tonight.”

Coming into the contest, Fuselier and company knew that they had to make stopping Pine quarterback Derrick Dillon their main priority, and except for a few long runs, the University of Florida commitment was kept relatively silent.

He finished the night with 75 rushing yards and the Raiders’ lone touchdown on 25 carries. He passed for 71 yards, accounting for 146 of the team’s 167 yards.

“Our guys did an excellent job of corralling him,” Fuselier said. “He’s a guy that’s going to get his yards, but we kept him from ever breaking the really big play. We want to be the more physical team every week. Our defensive line did a great job of putting pressure on him, our linebackers did an excellent job all night, and our secondary did a heck of a job by making all of that possible.”

On the opposite end the Yellow Jackets rushed for 296 yards as a team, with 193 coming from sophomore running back Taylor Johnson.

Johnson scored two of Kinder’s five touchdowns on runs of 10 and 5 yards.

“Taylor has done an excellent job week in and week out, but hats off to our offensive line for establishing that line of scrimmage early,” Fuselier said. “That was the biggest team we faced all year, and for us to rush for that many yards, it says a lot about our line.”

The game opened up with the Yellow Jackets forcing a three-and-out on Pine’s first drive. Two plays later junior quarterback Welles Cooley kept an option for a 51-yard touchdown to put Kinder up 7-0.

The Raiders (6-5) finished three-and-out on their next drive before Dillon coughed up a fumble on the last drive of the first quarter. Senior safety Zach Rider scooped the fumble up and brought it 32 yards for the second Kinder touchdown.

Johnson would add his first touchdown in the second quarter, followed up by a 19-yard field goal from Raul Barrera.

Dillon scored Pine’s lone touchdown with 44 seconds left in the half to enter the locker room with the Raiders trailing 24-6.

The second half was all Kinder, with Dillon only gaining six more yards on the ground in the game.

Cooley finished the game with 72 yards rushing and two touchdowns and 41 yards through the air.

Jordan Galloway added a catch for seven yards, and Paul Guttuso logged a reception for a yard. Robertson posted 13 yards rushing, while Guttuso had three yards on the ground on his only carry.

DAILY NEWS PHOTO/Donna Graham Franklinton’s DeAndre Allen comes down with a catch after battling with a Rayne defensive player for... read more