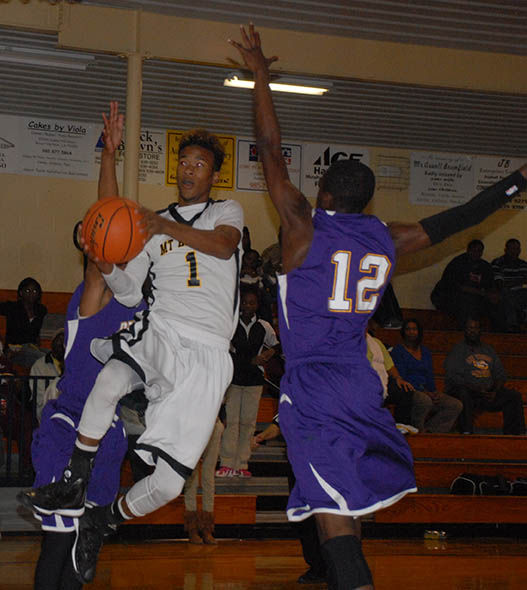 Mt. Hermon’s girls tipped off the tournament by defeating Kentwood, 24-19, in Wednesday’s opener, which was the Lady Jackets’ first game of the season.

It was also the Yellow Jackets’ initial contest of the season.

Varnado was victorious over Franklinton, 53-41, in the third game behind a huge game from Tarralyn Moses.

She scored a game-high 28 points. Moses knocked down three 3-pointers and was successful on seven out of her eight free throws.

Yienna Kemp finished with eight points, with teammate Breanna Holmes at seven. Kenisha Kemp totaled five points and was good on all three of her free-throw attempts. Ke’arria Green also had five in the win.

Errol Varnado was the Wildcats’ leading scorer with 19.

On the second day, Franklinton’s girls and boys won the first two games over the host school.

The Lady Demons pulled away from the Lady Jackets en route to a 53-33 victory.

FHS’ defense held the Lady Jackets scoreless for the final 6:22.

“They decided they really wanted to play ball,” Franklinton coach Elecia Crain said. “Our defense is usually much better than what we showed tonight.”

The Lady Demons were playing without Kierra Williams and McKenna Rosenthal. Williams is a starter and Rosenthal comes off of the bench.

Chelsea Armand led the Franklinton with 20 points, including four 3-pointers, and Shelby McDonald put up 12, two from beyond the arc. Fabré added nine in the victory.

“They got tired,” Mt. Hermon coach Danny Seals said. “We didn’t have a lot of depth to go in and substitute. That’s the difference in the game. Plus, we missed a lot of shots.”

The game was tied, 11-11, after one. The Lady Jackets took a 13-11 lead early in the second quarter on Jada Norman’s pull up jumper.

McDonald grabbed an offensive rebound and was successful on the put back, which gave the Lady Demons the lead for good, and began a 6-0 run.

Riley topped the Lady Jackets with 14 points, which included a pair of treys, and Angelica Anthony posted eight.

Franklinton’s boys were victorious, 87-51, in an up-tempo contest.

The Demons used a pressing defense and took over in the second quarter.

“We were pleased with our 20 points at the end of the first quarter. That’s about the pace we want to be at, but wasn’t real pleased with how we were letting them get to the rim to get their 15 points,” Franklinton coach Randall Ginn said. “I distinctly remember saying, ‘The 20’s fine, but 15, I didn’t think was real acceptable.’ We were played the third game in three nights (won all three), I’m sure several teams do that, but we’re going to be a little sloppier in the third game in three nights.”

Franklinton got the big lead beginning in the first period. The Demons led 18-15 after Williams, who scored 11, converted a 3-point play for the Yellow Jackets with 50.3 seconds remaining.

Franklinton then went on a 13-0 run. Dawson ignited the spurt with a put back from an offensive rebound with 32 seconds on the clock to make it, 20-15, after one. Warren hit a driving layup with 6:33 left in the second quarter. Peter Williams was good on a second-chance attempt for a 24-15 advantage.

Anders, who went for 30, including five treys, posted the next five points on a 2-pointer and a trey.

Franklinton never looked back after that in the 26 point win.

“We knew their pressure,” Mt. Hermon B. Alford said. “We should’ve been ready for it. We’re disappointed in the way we handled it. Franklinton got a lot of easy layups and we couldn’t afford for them to do that. We had turnovers that we shouldn’t have allowed.”

Burkhalter scored 18 points for FHS and knocked down three 3-pointers. Stewart added eight in the win.

The next game was a 68-38 victory for Varnado’s girls over Kentwood.

Holmes put up 18 and Yienna Kemp tallied 13 in the victory.

Despite the loss, Varnado had a strong game for the Wildcats, scoring 25 points, while Gary Crumedy finished with 11.

DAILY NEWS PHOTO/Donna Graham Franklinton’s Renaz Wilson powers his way to the end zone for one of his two touchdown... read more