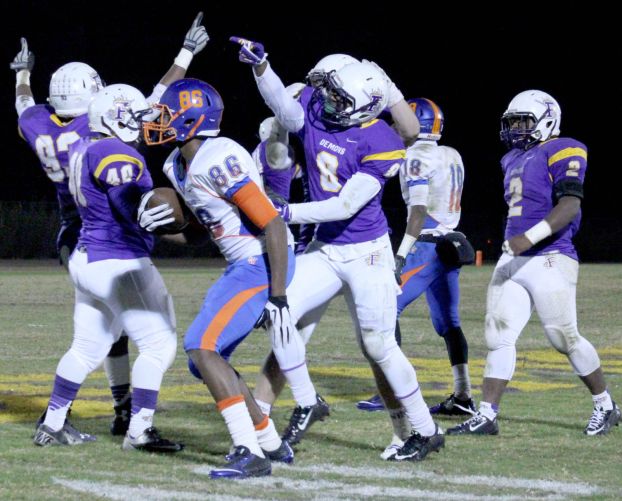 Franklinton’s Renaz Wilson scored the go-ahead touchdown and the Demons defense held, preserving a 21-15 Class 4A quarterfinal victory over Landry/Walker and sending FHS to the state semifinals Friday at home.

The Demons drove 65 yards in nine plays. The big play occurred on the drive’s third play. Facing third-and-9 from his 36, quarterback Michael Wilson connected with Chandler Davis on a 43-yard pass to the drive alive and it gave Franklinton the ball at Landry/Walker’s 21. Michael Wilson then gained eight yards before Renaz Wilson got the call on the next five plays. Over those plays, he picked up 2, 6, 3, 1 and finished it off with the 1-yard run to make it 21-15 with 1:48 left.

“On our last possession, I fumbled the ball and I knew I had to come and redeem myself by coming down here and scoring,” Renaz Wilson said. “Chandler Davis had that big play (the 43-yard reception) that just got us downfield. We knew we had to come down here, punch it in and make a play.”

After the touchdown, the extra point snap was bobbled and the holder was tackled, keeping it a 21-15 game.

Conner Ackerman’s kickoff went into the end zone, so Landry/Walker took over at its 20 after the touchback.

A holding penalty on first down, which is marked off from the spot of the foul, moved the sixth-seeded Chargin’ Bucs back to the 8. On first-and-22, Keytaon Thompson hit Tevin King for 16 yards. Three incompletions followed, but FHS was flagged for pass interference on fourth down, keeping the drive alive.

The penalty became a moot point, as Franklinton forced a four-and-out to secure the win.

Wilson credited the line and the secondary.

“If it wasn’t for the Dline and secondary, I wouldn’t be able to do my job,” Wilson said. “This is much of a team effort. I mainly want to thank God, and I want to thank my teammates and coaches for everything.”

Landry/Walker got on the board first after capitalizing on a turnover late in the first quarter.

Ruben Sartin intercepted Franklinton quarterback Michael Wilson at the Demons 30. The Chargin’ Bucs scored five plays later when Tevin Bush ran in from the 3. Michael Lee was good on the extra point and Landry/Walker led, 7-0, with 37 seconds remaining in the opening period.

The teams exchanged punts and Franklinton took over at its 24 with 8:30 showing on the first half clock and the Demons got things going.

The Demons embarked on a 16-play, 76-yard drive that took 6:32 off of the clock. Franklinton tallied when Renaz Wilson rushed in from the 1. Ackerman came out for the extra point, but Landry/Walker jumped offsides. The Demons then decided to go for two and Renaz Wilson was successful on the 2-point run and Franklinton had the lead, 8-7.

“Our coaches told us at halftime that when we make drives like that, that’s like NFL and college football material,” Renaz Wilson said. “We were very proud of ourselves. When we were down like that, we just had to keep fighting and keep moving forward to get our team in the end zone.”

The Bucs returned the kickoff to their 36, but on first down, Martavius James intercepted Thompson and returned the pick 38 yards to Landry/Walker’s 6

FHS gained three yards then lost one, but on third-and-goal, Michael Wilson kept right and scored easily with 43 seconds to go. Ackerman’s PAT was perfect and the Demons were up 15-7 at halftime.

The game stayed that way until the fourth quarter when Landry/Walker tied things. On fourth-and-goal from the 5, Thompson was under a heavy rush by FHS’ defense, but got the pass away and found Mikhail Jacobs in the back of the end zone to make it 15-13. Li’jon Cordier then hit Javon Conner for two, evening the contest at 15-15 with 6:13 left.

But FHS answered to get the win and the defense held to send the Demons to the state semifinals.

Renaz Wilson finished with 68 yards and two touchdowns on the ground. Michael Wilson threw for 82 yards. Azende T. Magee caught three passes for 39 yards, while Davis had the other 43 on his reception.

The only negative for the Demons was four turnovers.

Third-seeded Franklinton is on the road for the semifinals, facing second-seeded Neville Friday at 7 p.m.