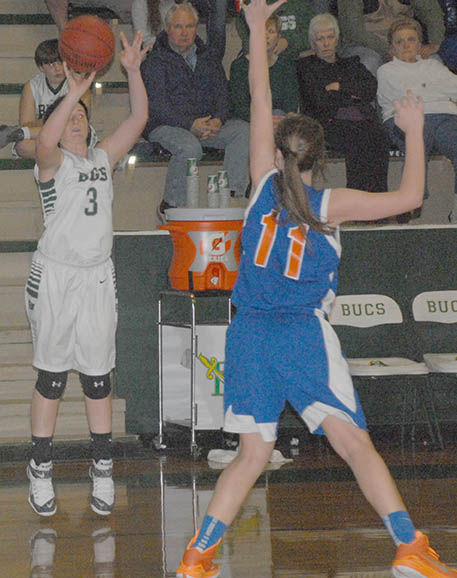 Bowling Green got off to a strong start, led by Kristina Jerrell, and held off several Columbia Academy second-half runs in a 57-46 victory at home Tuesday.

Jerrell came out strong, scoring 11 of her 19 points in the opening period. During the first quarter, she hit three treys and four for the game. Jerrell went 6-for-12 from the field, 4-for-9 from beyond the arc and 3-of-4 from the free-throw line.

“Kristina Jerrell came out on fire, making shots, and penetrating,” Bowling Green coach Pat King said. “We got out to that big lead because of her, but you know, it’s hard to maintain that, for one player to maintain that energy throughout four quarters. She played and got us going.”

Bowling Green’s Ashley Foret, who had six points and six rebounds, hit for two just 21 seconds into the second half to make it, 42-25.

It seemed like Bowling Green was en route to a lopsided victory, but Columbia (5-2) had other ideas and battled back.

Columbia went on a 6-0 run with Jacklyn Wilkes and Miranda Magee hitting treys to trim the margin to 11.

But Jerrell ended the spurt with a 2-pointer for a 44-31 advantage.

This was a theme throughout the second half. Columbia would get the deficit between 9 and 12 and the Lady Bucs would hit a couple of shots to expand it.

“As coach said, defense leads to good offense,” Jerrell said. “We played our heart out on defense and we just kept scoring.”

Reagan Moody led Bowling Green in scoring with 20 points on 7-of-11 from the field and 5-of-6 from the charity stripe. She added seven rebounds.