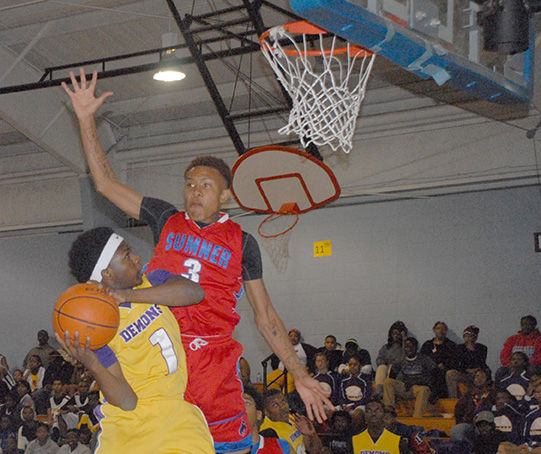 The BHS jamboree had two contests, a boys and a girls’ game with the host team facing Delta Charter.

Carriere added that both teams are excited about the upcoming season and appreciate the community’s support.

Varnado’s jamboree featured nine teams and nine games. Contests were 10 minutes long. There was a running clock until the 2-minute mark, when the standard clock operating rules went into affect.

“It went smooth,” Varnado boys basketball coach Brad Oestriecher said. “A lot of these teams don’t have all of their players. It was a good experience for these kids.”

Neither team had a lead bigger than four points, and the match up went down to the wire.

The teams were knotted at 15-15, but Isaiah Alexander broke the tie by hitting a 3-pointer with 14 seconds remaining. Jewel Sumner tried a trey but missed, and the follow-up 2-pointer was also no good.

Pine’s girls defeated Mt. Hermon, 11-8, in a comeback win in the second game.

The Lady Jackets got out to a 6-1 lead on 3-pointers by Nicole Riley and Jada Norman.

Pine came back with eight in a row. Laken Breedlove hit for two before Breyanna Brown hit a putback shot from an offensive rebound. Thomas was good on a layup and Kaylee Turnage came up with a steal and was successful on her layup to finalize the scoring at 9-6.

Turnage finished with three, while Breedlove, Brown and Thomas had two apiece.

Those two schools’ boys’ teams took the floor next, and Mt. Hermon won, 11-8.

Jessie Pouncey knocked down a 3-pointer, and then he hit Jack Brister for two.

Pine trimmed the margin to two once and three a few other times but never took the lead.

Pouncey led all scorers with 11 points. Brister and Corterrio Williams both added two for Mt. Hermon.

Pine’s Trey Cooper put up four, while Ty Galloway finished with three and Jordan Phelps chipped in with one.

The Demons jumped out to a 19-0 advantage over the first 8:27. Sumner scored its first points 1:27 remaining to make it 19-2. Tray Anders led the way with nine points for FHS. Quincy Stewart tallied four. Azende O. Magee totaled three, and Nick Burkhalter logged two.

Pine’s girls were victorious over Franklinton, 16-3, in the fifth game.

Turnage and Thomas opened the scoring for Pine before Franklinton’s Kierra Williams hit a layup, trimming it to 4-2.

Pine then scored five consecutive points on a two from Brown and a trey by Thomas.

Brown and Thomas both logged seven points, with Turnage having two.

Franklinton was the only team in the Jamboree with a first-year coach, Elecia Crain.

Her club went 0-2, but the event gave her young team some good experience.

“We are young and somewhat inexperienced,” Crain said. “But it’s coming. I believe we’re going to work through this, and this is a good experience tonight.”

The sixth game was a 19-9 win for Franklinton’s boys over Pine.

The contest was close until late. Franklinton led, 14-9, but put up the final five points over the last 36 seconds to win. Jadwyn Warren scored those points on a 3-pointer and then a layup. Warren, along with Anders and Burkhalter, scored five each. Ethan Pittman and Darrius Dawson both had two in the win.

Varnado’s girls then picked up a win over Mt. Hermon. The Lady Cats posted the game’s opening six points.

Tarralyn Moses hit two free throws to make it 2-0. Moses then hit Yienna Kemp for two more, and Moses was good on a layup for the 6-0 advantage.

Riley nailed a 3-pointer for the Lady Jackets with two seconds left to reflect the final score of 12-10.

The eighth contest was between Mt. Hermon’s boys and Varnado, with the Yellow Jackets winning, 18-12.

Pouncey opened the scoring with a two, followed by Williams’ field goal for a 4-0 edge. Brister hit for two before Gerald Bunch split free throws for a 7-0 lead. Williams capped off the run with a field goal, and it was 9-0.

Williams finished with seven, while Pouncey logged six and Brister had four.

Bunch added one in the win.

Varnado scored six points for the Wildcats, while Newkirk and Alexander tallied three each.

The night ended with Varnado’s girls winning against Franklinton, 12-5.

The Lady Cats led, 4-2, but scored the next four points to make it 8-2. Kenisha Kemp knocked down a pair of free throws and then took a pass from Green and scored a bucket for the 8-2 margin.

Franklinton trimmed it to 8-4, but VHS tallied four of the game’s final five points in the 12-5 victory.

Boglausa falls to Loranger in playoffs