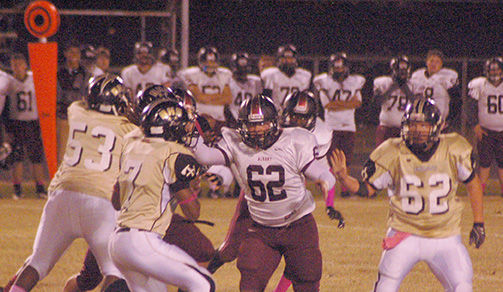 Bogalusa’s Lumberjacks are back in the playoffs and for the second consecutive week are on the road to battle Loranger in the bi-district round of the Class 3A postseason..

In last week’s regular season finale, the Lumberjacks lost to the Wolves, 44-26 after taking a 14-11 advantage to halftime.

The Lumberjacks turned the ball over just once last week. Jones said his club just has to finish.

“They scored three touchdowns in the fourth quarter,” Jones said.

Tymothy Toussaint has been playing extremely well. Last week, he turned in another solid performance.

He ran in two others, and caught a pass from Darnel Harris for a 2-point conversion.

Over the past two weeks, Toussaint has run for five touchdowns and thrown for four more.

“Last week, he (Toussaint) understood the game plan really well,” Jones said. “He distributed the ball very well to all of the receivers. He executed the game plan as well as he could have except for the one turnover.”

“We didn’t line up correctly in the second half, and we missed a lot of tackles,” Jones said. “Those are two things that shouldn’t be happening at this point in the season.”

Bogalusa, the No. 10 seed, enters tonight after going 4-6 overall in the regular season and 3-2 in district play. The Lumberjacks began the season with a 1-5 record but closed out the regular year by winning three of their last four games.

Last year, the Lumberjacks made the postseason, but lost to Richwood, 33-0.

Bogalusa’s last postseason win was a 48-42 victory over Carroll in the bi-district round of the 2009 playoffs.

The winner plays either seventh-seeded Patterson or No. 26 Richwood.

The Wolves finished runner-up in league play to Amite, which is the third-seeded team in Class 3A.

The Wolves have captured five of their last six contests and three in a row.

Evan Johnson is the quarterback, with Cody James and Devonte Green at running back.

Hunter Flanagan and Cody Watts are the receivers.