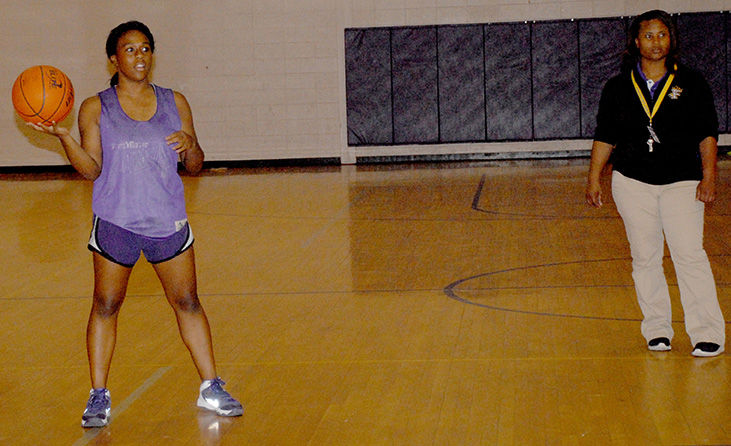 Crain, a 3-year starter at FHS, played point guard when Regina was the head coach and Paul was the assistant. Crain said they had three different coaches when she played at Franklinton. Regina came her junior season.

“Coming behind them and picking up the program from what they showed me to do has been exciting. I’m ready for the challenge,” Crain said in late October.

Crain talked about the type of play she likes.

“My kind of play is what Regina always taught us and that is quick because we don’t have much height. We’re going to use what we have, which is speed, and we do have a lot of that. With the young girls, we have a lot of speed.”

Crain, who graduated from Franklinton in 1995, has coached at Franklinton for the past four years.

Crain has a degree in political science and criminal justice. This year, Crain is teaching physical education. In the past, she has also taught physiology and elective courses.

She takes over a program that made it to the regional round of the Class 4A state playoffs last season. Franklinton made it as the No. 10-seed and lost to seventh-seeded Fair Park, 66-49. Fair Park lost in the quarterfinal round, 70-50, to eventual state runner-up Warren Easton, 63-51.

At Varnado, Meyerchick helped the Wildcats to a state title in 1988 and a top 28 appearance in 1990.

Meyerchick finishes with 546 career wins. He was also VHS’ football coach from 2003 through the 2011 season.

Meyerchick is retiring from the Washington Parish School system in December after 30 years of service and to be a safety supervisor for an industrial service company.

“This opportunity will not be there forever,” Meyerchick said. “It’s an opportunity for me to go and do something different. I’ve been in it for 30 years. I’ve coached a lot of kids and won a lot of games. I wanted to get to 600 (wins), but I sat long and hard, I talked to coach Regina about it, and I talked to (FHS principal) Mrs. (Lisa) Tanner. Mrs. Tanner has been as gracious as she could be. I mean I appreciate everything she’s done. She brought me over here last year and gave me a job here to work with the girls. Then I turn around and this opportunity came up, and I only had one year to work with the girls.”

Meyerchick said it’s not that he wants to get out of coaching, but it’s that he can’t pass this opportunity up.

“My wife and I have run, ripped and roared with kids all of our lives. Now it’s a chance for me to make a little money and go have fun with the rest of my life. I hope everybody can understand that. I’m going to miss the kids worse than anything. The teaching part of it and being around kids is fun to me. I love teaching kids. I love being around them, but it’s a situation where it was just a great opportunity,” Meyerchick said.

Fans will have a chance to see Franklinton’s girls play tomorrow at the Varnado jamboree. The Lady Demons are scheduled to face Pine at 5:40 p.m. and Mt. Hermon at 6:20 p.m.

Those games will be 10 minutes long.

There will be a running clock until the 2-minute mark.

At that point, the regular clock operating rules will go into affect for the rest of the game.