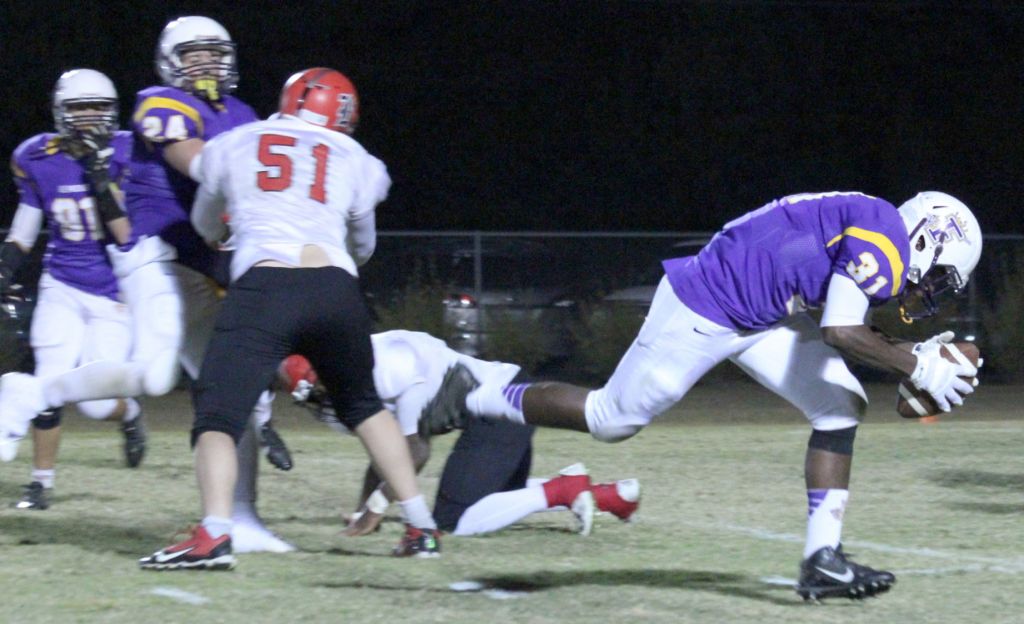 Demons coach Shane Smith said it was a special night for the seniors.

“I think each and every one of them played a good game tonight and made some good plays,” Smith said. “Devin Elzie, Josh Magee, obviously the defensive line did their thing. The offensive line was doing good things.”

The Demons’ defense was stout against a Riverdale team that entered the game, scoring an average of 38.1 points per game.

Franklinton (9-1, 5-0) turned the ball over on downs on its first drive. The Demons had third-and-goal at the 5, but Michael Wilson was sacked by Tyrus Butler at the 10.

Franklinton forced a punt on the ensuing possession and got things rolling offensively.

The Demons got on the board with 4:46 remaining in the first. Wilson found Chandler Davis, who turned toward the left sideline, turned up the field and took it the distance for the touchdown. Renaz Wilson ran in the 2-point conversion after an offsides penalty against Riverdale (5-5, 2-3), and it was 8-0.

FHS went up, 14-0, on a Renaz Wilson 25-yard run at the 1:49 mark. The 2-point conversion was no good after another flag on the Rebels for offsides.

The Demons forced the Rebels to punt on the ensuing possession, but Franklinton was flagged for roughing the punter, which gave Riverdale a first down.

Michael Wilson hit DeAndre Allen for a 54-yard score. The PAT snap was low. Conner Ackerman picked it up, but was stopped short.

“I was just doing what we do best, stick to our basics. We had a feeling we had a great match up and we took advantage of it,” Allen said.

Allen said they knew they had to come out and execute because Riverdale has great athletes.

“They are a great team. We knew we had to come out, execute, perform well, jump out on them early to get the early lead, so we could win this district championship,” Allen said.

Just over four-minutes later, Tajh Magee hit Allen for 34 yards and Allen’s second TD reception. Ackerman’s extra point was no good, but FHS was up, 26-0.

FHS tacked on six more on a great run. Azende T. Magee got the call. He ran left, avoided a tackle, cut back, kept his balance and scored on a 43-yard rush. The PAT snap was low and Chandler Davis was tackled short. The Demons were up, 32-0, with 4:46 showing on the first half clock.

The defense put points on the board with Josh Magee intercepting a pass and returning it 37-yards to pay dirt with 2:39 left. Ackerman’s hit the point after and it was 39-0 at the break.

“It was big,” Magee said. “I was just trying to make a play and I was trying to take my game to another level.”

Magee also forced a fumble and recovered it.

Franklinton outgained Riverdale 355-54 in the first half.

The Demons defense put their only points of the second half on the board with 48-seconds to go in the third.

Riverdale tried to run a screen pass, but Devin Elzie broke on the ball and intercepted it. He then raced to the end zone on the 12-yard touchdown return. Ackerman knocked the PAT through the uprights to make it, 46-0.

Riverdale avoided the shutout and scored a pair of touchdowns in the fourth quarter. Christian Smith connected with Donte Jackson on both touchdown passes from 47 and 67 yard scores. The Rebels made both extra points, trimming it to, 46-14.

Riverdale could get no closer in the Demons’ victory.

The next contest for the District 8-4A champions will be a postseason game.