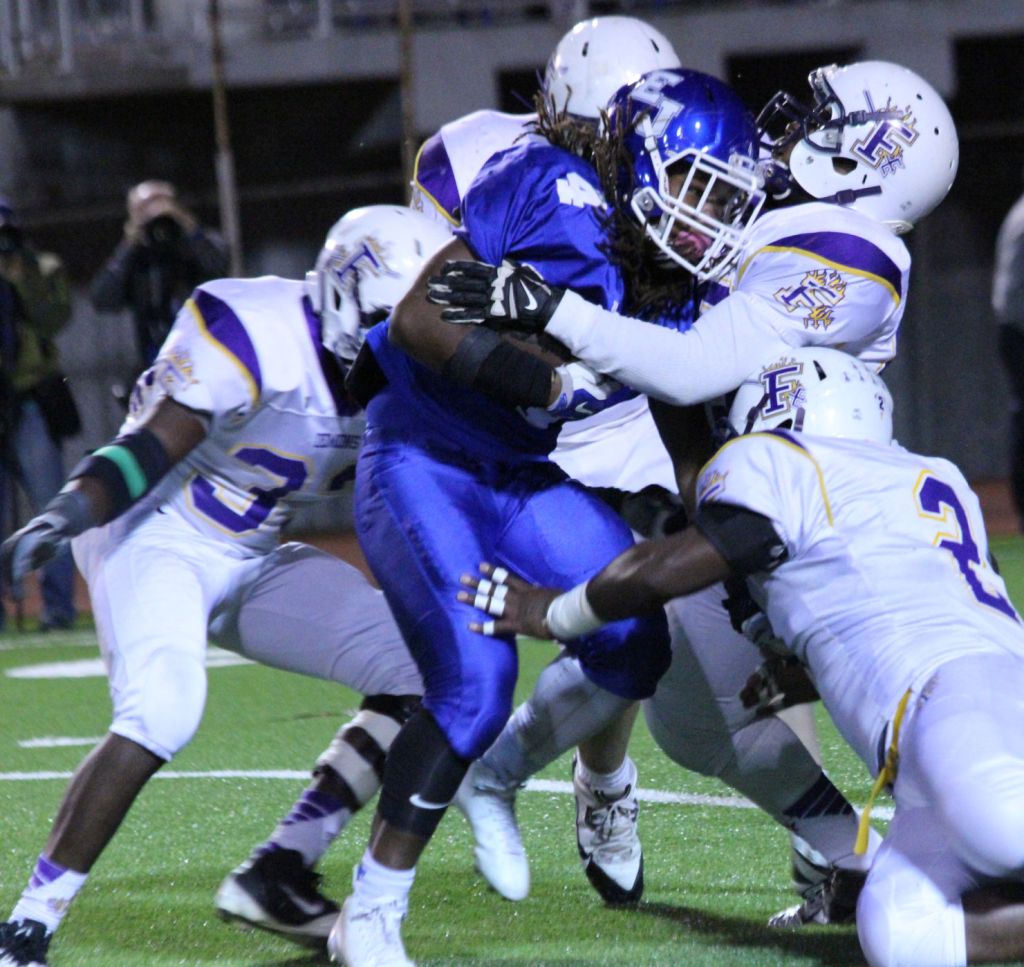 Franklinton puts its six-game winning streak on the line tonight, as the Demons celebrate Senior Night by hosting Riverdale in District 8-4A competition.

FHS has 16 seniors this year.

“They’ve got as much experience as any of our senior classes in recent years,” Demons coach Shane Smith said. “They’ve come a long way and have played a huge part of getting our program back to the level of where we want it to be.”

The Demons enter tonight’s play with an 8-1 overall record and 4-0 district record.

Last week, Franklinton clinched at least a share of the league title by defeating East Jefferson, 35-19. The 19 points were the most Franklinton has allowed during the streak.

A victory tonight and the Demons get the outright district championship.

Franklinton is fourth in the Class 4A power points. The three teams above the Demons, Plaquemine, Neville, Warren Easton all enter the final week of the regular season with 8-1 records.

The Demons moved up one spot in the Louisiana Sports Writers Association Class 4A Poll and are currently fifth.

The Demons were victorious in last year’s game, 58-22.

Chandler Davis tops the receiving group with 22 receptions for 420 yards and is second on the team with three touchdowns. DeAndre Allen begins tonight’s play at 18 catches for 390 yards and four scores.

Azende T. Magee has 14 catches for 171 yards and two touchdowns. Magee has also made his presence felt at running back. His carries went up when Renaz Wilson missed some time with an injury. Magee is closing in on 1,000 rushing yards this season and has chewed up 949 yards on 94 attempts (10.1 per carry) and 11 touchdowns.

Franklinton’s defense has made life tough on its opponents. Teams are averaging just 15.8 points per game. FHS is giving up an average of 162.7 yards per contest.

Teams are running for an average of 2.8 yards per carry and are averaging just 4.5 yards per pass attempt. Franklinton has intercepted eight passes and it’s not just one person. Martavious James and Josh Magee have two each, while Percy Briggs, Marcus Conerly, Rodney King and Tremario Magee all enter with one.

Conerly is the team leader in passes defensed with five.

James is second at 60 stops with 43 of them being solo.

Smith said the defense has done a good job this season.

“Our kids have done what they needed to do,” Smith said. “We’ve covered well, put pressure on the quarterback. We’ll be tested on the perimeter and down the field.”

Riverdale, which finished last season with a 4-6 record, enters tonight with a 5-4 mark overall and is 2-2 in district.

The Rebels are on a two game winning streak after beating Salmen, 48-31, last week. Riverdale has scored 48 points in each of the last two week and has broken the 40-point barrier in each of the last three weeks and five times this season. One of those was a 56-52 loss to L.W. Higgins.

The Rebels are averaging 38.1 points per game.

“We’ve done a lot of things on offense this year,” Rebels second-year coach Brett Bonnaffons said. “One thing we’ve done a great job of is scoring. We’re averaging about 38 points per game, but we’re facing the toughest defense we’ve faced all year this week in Franklinton.”

The offense has been led by its running game this season.

Darius Bovie has rushed for 1,365 yards with 13 touchdowns. He’s been on the receiving end of five other touchdowns.

Andre Sims was slated to be the team’s starting running back, but was hurt before the season began. He’s returned and played in three games. Since coming back, he’s run for 222 yards and three touchdowns.

Quarterback Christian Smith has thrown for 1,400 yards with 16 touchdowns and 13 picks.

Defensively, Bonnaffons said the Rebels have been opportunistic and have forced more than 20 turnovers.

Tackle Tyrus Butler has made 23 tackles for loss to go with his eight sacks.

Five teams have tallied at least 27 points against Riverdale. Two of them scored 56 and one put up 45.

Bonnaffons said some of the high-scoring games have been because of special teams and a couple of interception returns for scores.

He said Riverdale has allowed four touchdowns and two punt returns for touchdowns, but he said they feel that problem is fixed, as the team made some personnel adjustments.