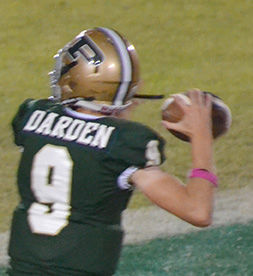 It’s been a historic season for the Poplarville High School football team.The club features a player in Austin Darden, who has ties to Bogalusa, and he has been part of the team’s success this season.

Darden’s father, Darrell, works for the city prosecutor’s office in Bogalusa, and grandparents Howard and Hazel Darden are Bogalusa residents.

Darden and one of his best friends, senior Clay Garrett, are the quarterbacks.

“Being a quarterback is a very fun job, but at the same time, it’s also tough,” Darden said. “Not only do you have to know your duty on the field, but you also have to know everyone else’s.”

The two competed for the starting position prior to the season.

“During the summer, we started out with a lack of experience at the position, but with the help of our new offensive coordinator Jacob Owen, hard work paid off,” Darden said.

Darden started the first two games, which was a good thing for him, but at the same time, it was tough for him to see his good friend having to watch. Darden said Garrett remained supportive of him.

Then first-year coach Jay Beech came up with a method for both of them to get playing time. He switched the players every game.

“We eventually got used to the transition,” Darden said.

And when it was all said and done, the team captured its first district championship in 20 years. Poplarville is in District 8-4A.

This season, Darden has completed 10 of his 27 passes for 128 yards, with two interceptions.

Garrett is 16-of-40 passing for 254 yards, with two touchdowns and a pair of interceptions.

Poplarville finished with an 8-2 overall record and 4-1 in district play. The team had its seven-game winning streak snapped in Friday’s regular season finale with a 36-7 loss to Vancleave. The other loss was to Pearl River Central, 38-6.

The team has won close games and lopsided contests. Of the eight wins, three of them have been by seven points or fewer.

Poplarville is hosting Richland on Friday at 7 p.m. in the first round of the playoffs.

The rest of his grandparents are Cliff and Diana Sullivan, Alvin Wheat and Hilma Williams.

Garrett is the son of Brad and Sonya Garrett. His grandparents are Harry and June Garrett, and Gary and Glenda Malley.