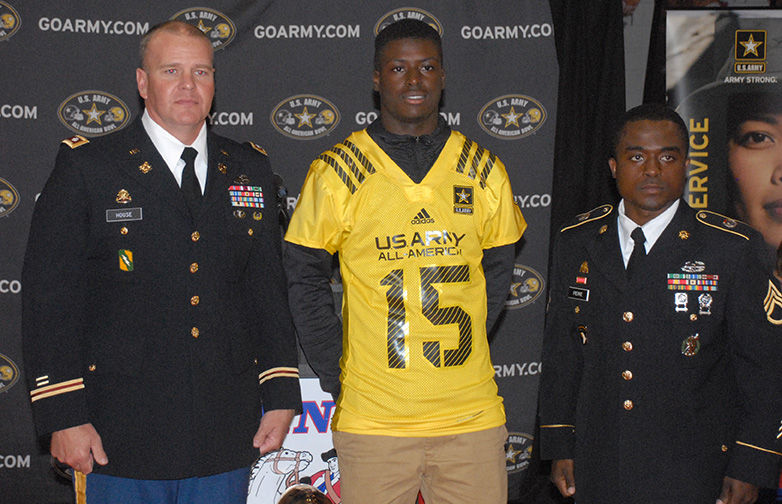 The U.S. Army All-American Bowl Selection Tour made a stop at Pine last Wednesday for a huge announcement about a prestigious honor for one of Washington Parish’s top athletes.

Pine quarterback and University of Florida commitment Derrick Dillon has been chosen to play in the 15th U.S. Army All-American Bowl.

“It means a lot to go off and represent my parish, my family, my team and my school,” Dillon said.

The senior spoke about his work ethic.

“I’ve just kept it the same each year,” Dillon said. “I try to get better and not waste any time in the weight room.”

Pine coach Bradley Seal said this is a huge honor for Dillon.

“He understands that this doesn’t happen to every player, but he’s done the work, he’s put in the time and gave the effort to deserve everything and every award he gets,” Seal said.

“He loves the game of football, so that comes easy for him,” Seal said. “He’s a hard-working kid. As far as on the field, he’s just an explosive player that makes plays.”

The contest features 90 of the best players and 125 of the top marching band members from all across the nation.

Players are chosen not only because they excel on the football field, but because they possess the strengths similar to our Army Soldiers of mental, emotional and physical toughness.

The game takes place Jan. 3, 2015 at the Alamodome in San Antonio with kickoff set for noon.

The contest is being televised on NBC.

To learn more about the game, visit http://www.usarmyallamericanbowl.com.

Pine won its game Friday, 22-14, over Northlake Christian School. The Raiders are back in action Friday at home against St. Helena Central in the regular season finale.