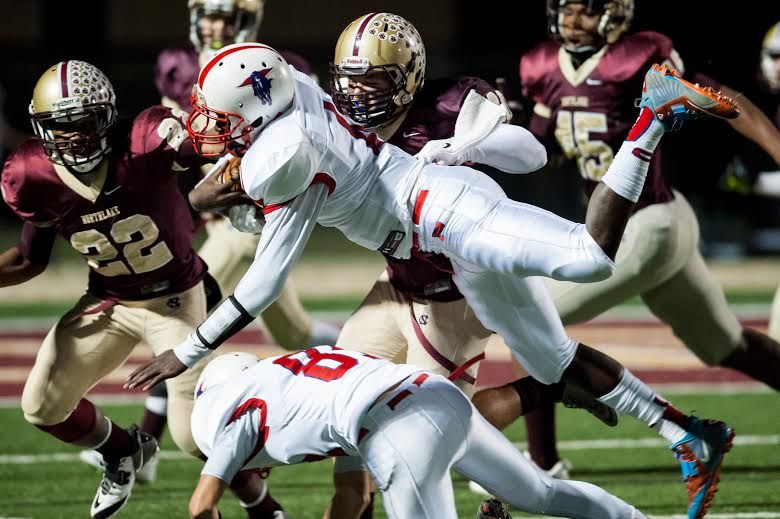 Pine forced a pair of turnovers in the first quarter, took advantage and then hung on for a 22-14 victory over Northlake Christian School in District 7-2A action Halloween night at NCS.

The Raiders (5-3, 3-2) took a 22-0 lead by intermission in a fast-moving first half, which took just 55 minutes. Each team had just three possessions.

Pine scored on every first half possession and had at least 10 plays on each.

Brendon Kelly recovered a pair of Wolverines’ fumbles, both at Pine’s 31 and the Raiders took advantage.

After Kelly’s second fumble recovery, the Raiders drove 69 yards once again, but this time on 19 plays, taking 10:06 off of the clock. The Raiders went up 14-0 on Dillon’s 4-yard run. Dillon then hit Demarcus Fland for the 2-point conversion with 5:57 remaining in the second quarter.

“It was good to capitalize on the turnovers,” Dillon said. “It was a key factor in the game. When they made a mistake, we had to go put points on the board.”

Pine’s defense forced a punt and took over with 3:43 showing on the first half clock. That was just enough time for the Raiders, who drove 62 yards in 12 plays.

Dillon snuck in from a yard out with two seconds left, and then Dillon hit Adarrius Berry for two, making it 22-0 by halftime.

“We did the best we could. We did what we had to do to win,” Berry said.

Dillon connecting to Berry was a fitting end to the first half. The Raiders did a good job mixing up the carries between the two of them throughout the game.

Dillon finished with 131 rushing yards on 19 carries in the opening half, while Berry posted 96 yards rushing on 16 attempts. Dillon also threw for 19 yards on 2-of-3 passing.

“When you do that, the credit goes to the offensive line,” Pine coach Bradley Seal said. “That offensive line in the first half, nice job.”

Pine ran the ball 38 times in the first half and every play gained at least a yard.

The Wolverines forced a pair of three-and-outs and got on the board on their second possession of the third quarter.

The Wolverines then tried an onside kick. Jamie Sencial recovered the attempt for Northlake Christian, giving the Wolverines the ball at Pine’s 43. From there NCS drove the distance, capped off by Black’s run from the 1. Landry was good once again on the PAT, trimming Pine’s advantage to 22-14 with 31 seconds left in the third.

Pine took over at its 31 after the kickoff, but a flag pushed the Raiders back to the 26. Pine drove to the 14, but fumbled and Jerrard McElveen recovered for NCS with 7:26 remaining.

Northlake Christian took the ball down to Pine’s 22. Facing fourth-and-8 and under two minutes left, the Wolverines were forced to go for it, but Pine’s defense rose to the occasion and forced a 3-yard loss with 1:44 on the clock.

NCS was out of timeouts and Pine ran out the clock to seal the victory.

The Raiders next game is Friday at home against St. Helena Central in the regular finale.