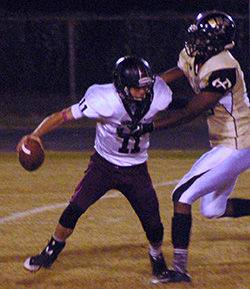 The Bogalusa Lumberjacks ended a festive week of homecoming activities by downing Albany to the tune of 48-8 on Friday at Lewis V. Murray Jr. Stadium.

The Lumberjacks’ defense set the tone early and dominated the Hornets throughout the night. The only Albany highlight was workhorse running back Randy Ingram. He found the sidelines and outran Bogalusa’s secondary with 6:55 left in the game for the Hornets’ only score.

Lumberjacks coach Craig Jones was pleased with his team’s effort.

“With it being homecoming, you never know where the kids’ mind might be,” Jones said. “But they came out and did what they were supposed to do.”

Albany took the kickoff and returned to its 29. After a first down on the opening drive, the Hornets fumbled, and Tymothy Toussaint recovered for the Lumberjacks on Albany’s 35-yard line.

It took Bogalusa but four plays to find pay dirt. On the quarterback keeper, Toussiant scored on a 2-yard run with 5:37 left in the first quarter. Aaron Taylor completed a pass for the 2-point conversion on a fake PAT for an 8-0 lead.

The Bogalusa defense had Albany going in reverse with three straight stops for loss.

Following an Albany punt, Bogalusa started at its own 25. Mixing the run and pass, Toussaint connected with Dionte Fernandez for BHS’ second score.

Taylor’s PAT kick was blocked, but the Lumberjacks led 14-0 with 56 seconds left in the opening quarter.

Bogalusa’s William Toussaint scored on a 4-yard run with 5:56 left before halftime. The PAT failed and the Lumberjacks led 20-0.

Tymothy Toussaint made it 26-0 on an 11-yard run, and it stayed that way through halftime.

Bogalusa’s 48 points was its best offensive output of the season.

“It was a good win for the seniors and a good night for the school,” Jones said. “It was a good way to end homecoming week. We have been moving the ball well the past three weeks. The kids are having fun and are able to put some points on the scoreboard.”

It was much of the same scenario in the second half as the Lumberjacks’ defense continued to dominate.

Albany tallied, trimming it to 40-8, but Bogalusa added one more touchdown when Dominique Tillman caught a pass from Roberts that went for a 35-yard score. Roberts added the 2-point conversion for the final score, 48-8.

With their third straight win, the Lumberjacks improved to 4-5 overall and 3-1 in District 8-3A.

Albany dropped to 2-7 overall, 0-4 in district. The Hornets have dropped four straight.