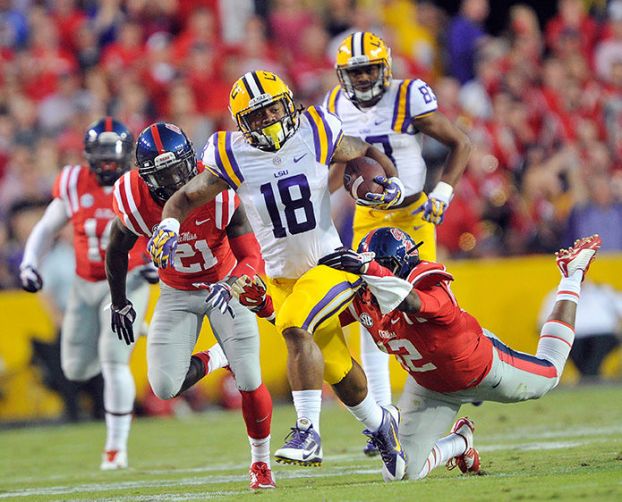 LSU senior Terrence Magee turned in another solid performance Saturday night in the Tigers’ 10-7 victory over previously undefeated and No. 3 Ole Miss in Tiger Stadium in a Southeastern Conference game.

This season, Magee is second on the team in rushing. He’s run for 418 yards on 69 carries (6 yards per attempt) and is tied for third on the club with three touchdowns. Magee also has 10 receptions for 122 yards.

Fournette leads LSU at 131 attempts for 657 yards (5 yards a carry) and seven scores.

Hilliard begins this week with 84 attempts for 416 yards (4.9) and is second on the team with six scores.

Ole Miss (7-1, 4-1) took a 7-0 lead with seven seconds remaining when Bo Wallace found Cody Core for a 15-yard touchdown pass. Gary Wunderlich made the extra point and the Rebels led, 7-0, after the first.

It stayed that way until the fourth quarter. LSU went in front for the only time after completing a 13-play, 95-yard drive, which ended on a 3-yard touchdown pass from Anthony Jennings to Logan Stokes.

The Tigers’ defense continued its strong play after that, and Ronald Martin came up with the game-clinching interception with two seconds remaining for the victory.

LSU is off this week, but returns to action Nov. 8 by hosting Alabama at Tiger Stadium.

Kickoff is scheduled for 7 p.m. and the game is being aired on CBS.

Winning has a nice ring to it