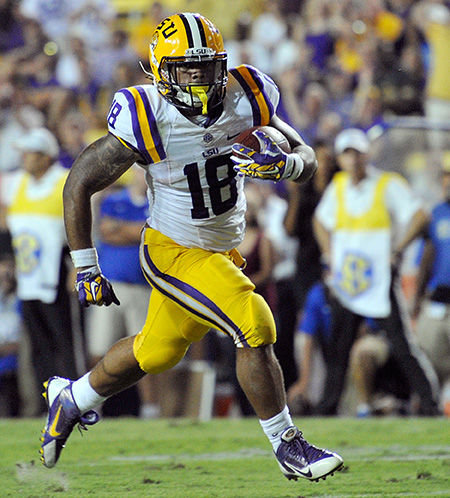 LSU senior Terrence Magee turned in a strong performance in the Tigers’ 41-3 victory over the University of Kentucky Saturday night at Tiger Stadium.

The 2011 Franklinton graduate ran nine times for 127 yards (14.1 yards per attempt) and two touchdowns, while adding three receptions for 44 yards.

Magee tallied the Tigers’ final two touchdowns on runs of 5 and 23 yards to put LSU up 34-3 and then 41-3. All of the Tigers’ points occurred within the first three quarters.

Magee’s strong performance began on the opening kickoff when he ran the kick back 44 yards. The Tigers picked up an extra 15 yards on the play because of a facemask penalty against Kentucky.

This season, Magee is third on the team in rushing with 57 carries for 344 yards and three touchdowns.

LSU led the entire game Saturday and had a double-digit advantage halfway through the first quarter until the end.

Leonard Fournette got the Tigers on the board with a one-yard run. Colby Delahoussaye, who was successful on all of his field goals and extra points Saturday, hit the point after to make it 7-0.

Austin MacGinnis put Kentucky on the board with 1:15 remaining with a 33-yard field goal to make it 17-3, but those were the Wildcats’ only points.

The game stayed at 17-3 until late in the second period. Travin Dural caught a 32-yard pass from Anthony Jennings for a 24-3 advantage with 44 seconds left.

LSU recovered the kickoff, and Delahoussaye split the uprights on a 35-yard field goal, with seven seconds left until halftime to put the Tigers up 27-3 at the break.

Magee scored both third quarter touchdowns to reflect the final score of 41-3, as neither team tallied in the fourth quarter.

LSU, which is ranked 24th, is back home Saturday, facing No. 3 Ole Miss.