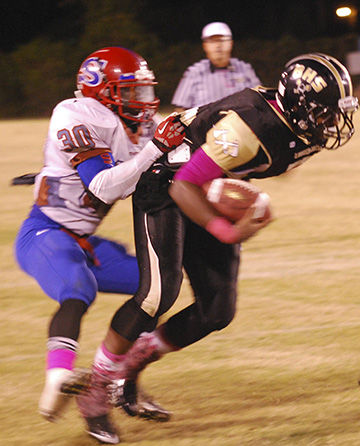 There were two seconds left in the game, and Jewel Sumner led 13-8.

With the ball on Sumner’s 10-yard line, Bogalusa quarterback Reggie Roberts threw a pass to the right corner of the end zone. The buzzer sounded as the ball left his hands. Breath held tight, the crowd watched on as the ball sailed into the waiting hands of Lumberjacks’ receiver Tymothy Toussiant for the touchdown and the victory. Bogalusa beat Sumner, 14-13.

In the end it came down to that last play, in the last seconds of the game.

As Bogalusa coach Craig Jones put it, “Bottom line, we got the victory.”

That final play was a perfect summary of the game, with Bogalusa and Sumner fighting for every drive.

The first quarter had each team’s offense pushing against a ready and determined defense.

BHS senior Aaron Taylor opened the game with a kickoff to the Cowboys’ Stevie Pittman, who returned it to the Sumner’s 21-yard line.

The drive stalled at the 37, and Morris Mckanic punted it to the Lumberjacks’ 29.

In much the same fashion, Roberts led Bogalusa in a four-play drive that stalled at their own 30.

The Cowboys pushed a 12-play drive that ended in the second period with the Lumberjacks making a defensive stand. Defenders Toussaint, Devonte Lenior, and Darnel Harris stepped up to halt the drive at the 4.

The Cowboys were quick to get the ball back and with one minute left on in the half were able to make the game’s first touchdown. Quarterback Dakota Stokes ran down the center of the field for the score. Kenneth Brumfield kicked for the extra point and Sumner led, 7-0, at halftime.

Returning from the half, Sumner’s Demontrei Thomas kicked off to Bogalusa.

The Lumberjacks couldn’t get a drive rolling, and Taylor punted the ball back to the Cowboys’ 37. Sumner put in a hard press down field, but William Toussaint and Devontre King pressed back.

In a second pass attempt to Hart, King stepped in and intercepted the pass at Bogalusa’s 48-yard line and took it all the way, 52 yards, for the touchdown. BHS went for the 2-point conversion with a quarterback keeper, and Roberts made it in, giving Bogalusa an 8-7 lead.

Two drives followed, with Bogalusa and Sumner fighting for field position. A punt by Taylor was caught by the Cowboys’ Kijuan Lee at Sumner’s 29-yard line. Lee returned it 71 yards for the touchdown, and Sumner was back in front. Brumfield attempted the extra point but missed, keeping it 13-8.

It stayed that way until the exciting finish in the Lumberjacks’ victory.

BHS goes for two straight Friday, as the team heads to Independence.

Franklinton’s Azende T. Magee had a monster night, helping the Demons to a 44-10 victory over Salmen in District 8-4A... read more