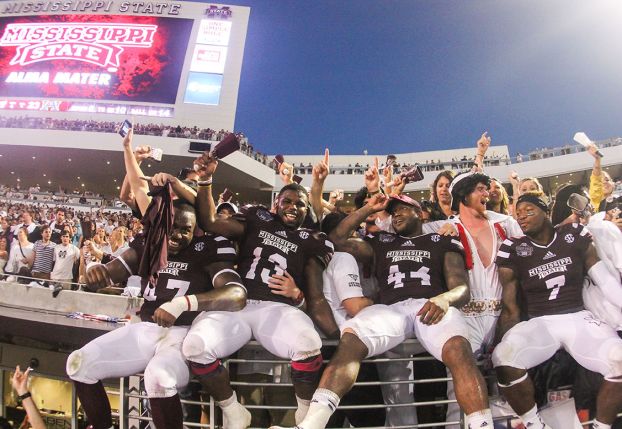 Bulldogs ranked No. 1 in the country

Mississippi State University captured its sixth-straight win to begin the season and its third straight conference victory of 2014 with a 38-23 victory over second-ranked Auburn at home Saturday.

After starting last week as the No. 3 team in the country, the Bulldogs have climbed up to the top spot in both the Associated Press Poll and USA Today Coaches’ Top 25 for the first time in the program’s 119-year history.

Mississippi State got 45 of the 60 first-place votes in the AP Poll and had 26-first place votes and 1,490 points in the Coaches Poll.

Bulldogs junior running back Josh Robinson, a 2011 Franklinton High School graduate, has played a key role in the team’s 6-0 start this season. Against Auburn, which tied Alabama for the best record in the SEC West last year, Robinson ran for 97 yards on 19 carries (5.1 yards per attempt) and two touchdowns.

Mississippi State is tied with Ole Miss (6-0, 3-0) at the top of the SEC West. Alabama and Auburn, which are both 5-1 overall and 2-1 in conference, are tied for second.

Early on in Saturday’s game, MSU’s defense stepped up by forcing a pair of turnovers, which led to Bulldogs’ touchdowns. The team intercepted a pass and recovered a fumble.

“The first series, we started out slow and our defense got us back-to-back turnovers,” Robinson said. “They got us momentum and we took momentum from that point.”

Bulldogs’ quarterback Dak Prescott threw for 246 yards on 18-of-34 passing with a touchdown and two picks. He also ran for 121 yards on 21 carries and two scores.

Robinson said the two have had a good relationship since high school.

“We played each other in the quarterfinals of the 2010 playoffs. We’ve had good since good chemistry since high school,” Robinson said.

Prescott went to Haughton. Franklinton beat Haughton, 49-41, in the game Robinson mentioned. That year, Franklinton defeated Edna Karr, 34-28, in the finals to capture the Class 4A title.

Robinson leads the Bulldogs in rushing with 689 yards on 98 carries (seven yards per carry), and he’s tied for the team lead, with Prescott at eight rushing touchdowns.

Robinson’s rushing total places him 19th in the country.

Mississippi State is off this week, but goes for 7-0 Oct. 25 on the road against Kentucky with kickoff set for 2:30 on CBS.