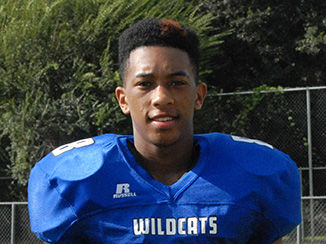 Sometimes a score isn’t indicative of how a game went or how a particular team played.

That was the case Friday night in Varnado’s 32-14 loss to Kentwood in the opener of District 7-1A.

The Wildcats, backed up against their goal line, threw a deep pass, but the throw was intercepted by Shyheim Carter and returned for a touchdown to give the host school an 18-14 lead.

It stayed that way until there was less than three-minutes left, when the Kangaroos (5-1) added another touchdown and 2-point conversion, and it was 26-14.

They held on for the 18-point victory.

“Defensively, we played lights out,” Shaffett said. “They have a special individual in Shyheim Carter. You can only hold somebody like him down for so long. I was proud of the way the kids played. Our guys are playing some exciting football right now.”

Varnado got on the board first, as D.J. Jefferson found Delrick Abrams for six. The 2-point conversion was good on Jefferson’s run, and the Wildcats had an 8-0 lead.

Kentwood scored, but the 2-point conversion failed, and Varnado took an 8-6 lead to the second period.

The Wildcats added six to their lead on a Tyrandis Crosby run. The 2-pointer was no good, but Varnado was up 14-6.

Kentwood trimmed the lead to 14-12 and it stayed that way through halftime.

Neither team scored in the third quarter, but Kentwood had a big fourth quarter in the win.