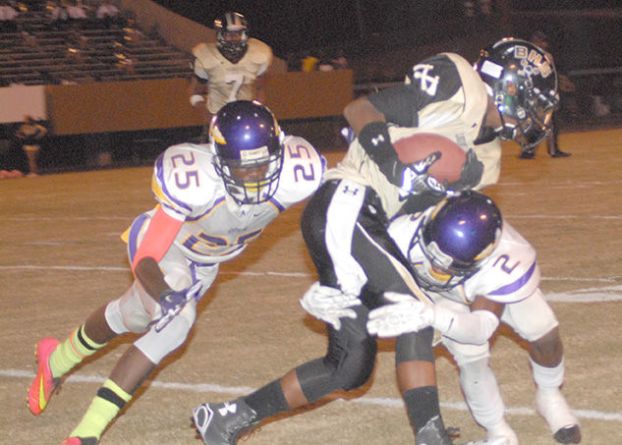 Lumberjacks hurt by big plays and turnovers in loss to Amite

Bogalusa gave up several big plays and committed six turnovers in a 33-7 loss to Amite in the District 8-3A opener at Lewis V. Murray Jr. Stadium Friday.

Montray Walker ran in from three-yards out for the first score.

The second occurred when Kenner Harrell, who finished with 103 yards on the ground, hit pay dirt on a five-yard run. The big play on the drive was Devarious Henderson connecting with Dazarrious Downing for 68 yards on third-and-19 from the Warriors’ 15.

It was 14-0 after one. Amite added another touchdown with 4:47 remaining in the second quarter. The Warriors’ snap was fumbled, but quarterback Henderson picked up the loose ball and took off running in the open. Nobody was going to catch him, and he scored. Myron Dokes was good on all three extra points, and it was 21-0.

Bogalusa (1-5) got back in the game on the ensuing drive. Facing second-and-2 from Amite’s 43, Reggie Roberts completed a 43-yard pass to Sean Forbes. Aaron Taylor was successful on the extra point, and the Lumberjacks trailed 21-7 with 1:45 left in the first half.

Bogalusa had a chance to draw closer. The Warriors drove to the Lumberjacks 9, but BHS’ William Toussaint ended the drive by intercepting a pass and returning it to Amite’s 15 with nine seconds showing.

The Lumberjacks were penalized back to the 30 on an unsportsmanlike flag. On the first play from scrimmage, Dokes came up with an interception to end the half.

Bogalusa had another opportunity get within a possession at the outset of the second half. They drove to Amite’s 37, but on second-and-9, Roberts’ pass was picked off by Jeff Devon and returned to the Warriors’ 34.

“That’s the turning points, and that’s the little things,” Jones said. “I tell the guys that you get three to four chances to score a game, and we missed out on two opportunities that would make a difference in a ballgame.”

Amite capitalized on the Lumberjacks’ interception that came on the first drive of the second half.

Trayon Cook took the handoff and ran 21 yards to complete the six-play, 68-yard drive, and it was 27-7 after Tyran Holloway blocked the PAT.

The score stayed that way until late in the third period when the Jacks fumbled. Justin Brister recovered for Amite, took off running, and returned it 27 yards for the touchdown. Holloway once again blocked the extra point, and the Warriors were ahead, 33-7, with 1:05 left in the third quarter.

Neither team was able to score after that in the 33-7 loss for BHS.

Bogalusa returns to action Thursday and attempts to snap its three-game losing streak in a home game against Jewel Sumner.

After that, the Lumberjacks take to the road to play Indepence Oct. 24.