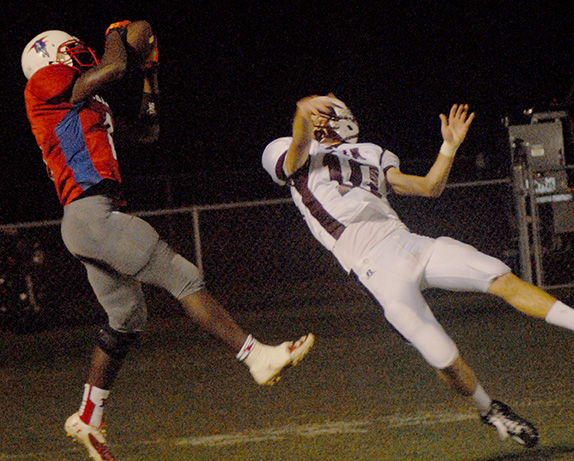 Sometimes, a football game can come down to just a few chances and which team capitalizes.

Friday night, Pine had two chances to tie and potentially take the lead on St. Thomas Aquinas while down by six but couldn’t punch it in the end zone, as the Falcons defeated Pine 42-34 in a District 7-2A match up at Pine.

St. Thomas (4-1, 2-0) returned the kickoff to Pine’s 46 but took over at the 31 after an illegal substitution penalty against the Raiders.

The Falcons drove to the 11, but the drive stalled. STA attempted a 27-yard field goal, but it was blocked. Paul Guttuso returned it to his own 18 for Pine.

Pine completed a long pass to Tory Robertson, but an illegal block against the Raiders moved it back to the 20, setting up a first-and-8.

Dillon took the snap and kept. Dillon got into the open and ran 70 yards to St. Thomas’ 10. After an illegal procedure penalty, Pine advanced it to the 5 over three plays and faced fourth-and-goal.

Dillon dropped to pass and tried to scramble, but St. Thomas stopped him at the 7 with 4:36 left.

Pine’s defense forced a three-and-out. After the punt, Pine took over at St. Thomas’ 40 with 2:53 remaining.

Pine lost and then gained a yard on second and third down, and it was fourth-and-10 from the 40. Dillon tried to scramble but was only able to pick up five yards, and the Falcons took over at their own 35 with 1:57 left.

On the first play from scrimmage, quarterback Cameron Dantzler essentially put the game out of reach when he raced 65 yards to pay dirt and then threw to Ralph Haynes for the 2-point conversion for a 42-28 lead.

Both of them had huge nights for St. Thomas. Dantzler ran for 186 yards and four touchdowns. He also threw for 101 yards, including a 21-yard scoring pass to Haynes.

Pine took the ensuing drive, and Dillon scored on the game’s final play with a 14-yard run to cap the scoring at 42-34.

“They made plays down the stretch, and we didn’t,” Raiders coach Bradley Seal said. “I’m proud of the way our guys played, we came back and fought. We were in it until the end. We had a chance to tie the game up late in the game on the 5, but couldn’t get it done. There’s still a play here or there that we’re not making when we need to.”

Dillon had a good night. He threw for 233 yards and two scores while rushing for 120 yards and three touchdowns.

The offenses took a little bit to get going. St. Thomas Aquinas scored the game’s 12 points on Dantzler runs. His first was a 10-yarder with the second one going for 71. The extra point kick for the first touchdown hit the right upright and the 2-point conversion on the second was incomplete, and St. Thomas led 12-0 with 7:38 left in the second period.

Pine got on the board with 3:58 showing on the first-half clock when Dillon scored from the three, capping off a 10-play, 65-yard drive.

Robertson ran in the 2-point conversion, trimming it to 12-8.

STA added to its lead with 24 seconds remaining in the half. Dantzler hit Haynes for 21 yards on fourth-and-6. Haynes broke a tackle before scoring the TD. Dantzler kept for two, and the Falcons were ahead 20-8 at halftime.

Pine got the lead to 20-14 in the third quarter, as Dillon found Devonta Pigott for 36 yards with 9:55 left in the third. The 2-point conversion failed.

St. Thomas punted, and Dillon was intercepted by Reed Bolton at Pine’s 17. The Falcons took advantage and scored from inside the 1, as Dantzler leaped above the line and stretched the ball over the goal line. He then hit Haynes for two, and it was 28-14 at the 3:01 mark.

Pine responded when Dillon snuck in from the 1 with 19 seconds left. Pigott ran in for two and St. Thomas’ lead was down to 28-22 after three.

The offenses continued to stay hot. This time was St. Thomas’ turn, and Haynes tacked six more to the lead. The 2-point pass was caught, but out of bounds. It was 34-22 with 10:34 to go in the fourth.

Pine responded one play after the kickoff. Dillon hit Nielsen across the middle. Nielsen made a couple of moves, got into the open and outran the defense to the end zone for the touchdown. The 2-point conversion was no good, but Pine was within six at 34-28.

The Raiders had two chances to at least tie, but St. Thomas’ defense stepped up and stopped Pine in the 42-34 win.

Pine’s Paul Guttuso caught three passes for 70 yards, while Pigott had two receptions for 66 yards. Robertson posted four catches for 31 yards, and he had 30 rushing yards.

Pine returns to action Friday with a trip to Pope John Paul II in Slidell.

Franklinton solid in victory over Amite