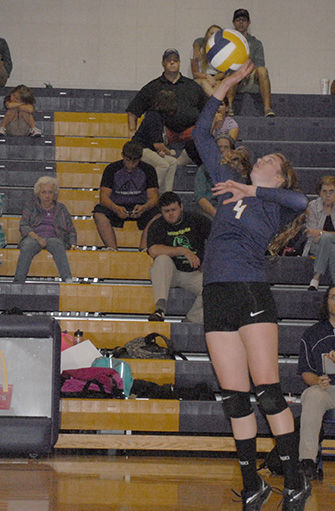 Franklinton defeated by Salmen in 3 games

The Lady Demons (5-10, 0-2) played well, but Salmen had a huge run in every game, which was essentially the deciding factor, Thursday.

“I saw lots of things, but the thing I see the most is that we’re giving way too many points off of serves,” Franklinton coach Leslie McGhee said. “I think the second set we gave six points off of serves and three off of balls that dropped right in between (players). We can’t continue to win points and give points. We’ve struggled to win a couple and then we give them back on silly fundamentals.”

FHS trailed, 5-3, in the first game, but tied things, 5-5. Kelsey Lewis pulled the Lady Demons within one with a kill before FHS evened the contest.

But then the Lady Spartans made a huge run, which they did in every game. This one was a 10-0 spurt, and Salmen was in front 22-12.

Franklinton was facing game point, down 24-13, but consecutive kills by Lewis and then another point by the Lady Demons made it 24-16.

Unfortunately for Franklinton, the fourth try to end the game was the one that sealed it for Salmen in a 24-16 opening game victory.

In the second game, the Lady Demons got down, 7-4, but turned things around with an 8-0 run of their own, giving the team a 12-7 advantage.

Salmen chipped away and had FHS’ lead down to 14-11, but the Lady Spartans ran off eight in a row to take a 19-14 advantage.

The Lady Spartans’ lead was between four and six from that point, and Salmen took a two-game lead with a 25-20 win.

The third game was also competitive until about the halfway mark.

Franklinton tallied the first three points and then Salmen put up three straight of its own.

The Lady Spartans went up 9-5, but Franklinton continued to battle.

FHS is back in action Tuesday against East Jefferson at home.

Runners take their mark at the Blues & Heritage Festival