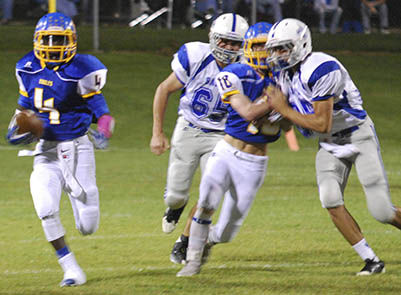 In an exceptional offensive and defensive showing, the Ben’s Ford Eagles soared past the Sylva Bay Academy Saint in a 37-7 victory.

Moss returned the kick to the Eagles’ 45, starting a seven-play drive. A quick handoff to Corey Caldwell by quarterback Daniel Pittman put Ben’s Ford on the board three minutes into the first quarter. Adam Smith was good for the extra point, and it was 7-0

The Ben’s Ford defensive held the Saints without give up a single yard, as Ben’s Ford’s Cole Williams stopped three consecutive rushes by Sylva Bay’s Jarvis Carr, forcing the Saint to punt.

On the next drive, a quick pass by Pittman to Caldwell earned the Eagles 40-yards and the second touchdown of the game. The PAT was good and it was 14-0.

With five minutes left in the first quarter, Smith kicked off to the Saints. Russell Smith took it at the four, and it to the 27 before Williams took him down. Smith fumbled and Shelby Culpepper recovered for the Eagles at the 27-yard line. Culpepper ran it for the Ben’s ford Eagles second consecutive touchdown. Adam Smith’s PAT made it 21-0.

The Eagles defensive stepped up again Daniel Pittman made an interception and returned it to Sylva Bay’s 40.

The Eagles began the second quarter with quick push to the Sylva 22. Adam Smith came back on the field to attempt a first field goal and he hit it for a 24-0 lead.

The Eagles forced another punt and the offense began at Sylva’s 43.

Pittman handed off to Aaron Taylor for a 9-yard gain. Pittman repeated the play and Taylor found and hole and went in for a 34-yard touchdown. Adam Smith missed the PAT, but his team led 30-0.

After another defensive stand, Sylva Bay punted and the Eagles started at the 50.

Eagles Quarterback Daniel Pittman alternated handoffs to Taylor and Josh Crain over six plays moving the Eagles down to the 3. A last hand off to Aaron Taylor put the Eagles over the goal line and the touchdown. Smith’s kick was good and it was 37-0 at halftime.

Sylva Bay received the second-half kick and kept possession for most of the third quarter through a long drive to the Eagles 43. Sylva Bay punted to the Eagles 18.

Garrett Pounds uses a series of handoffs to Andrew Smith and passes to Brannon Crosby to drive the ball to midfield. However the Sylva defense rallied and managed to stall the Eagles offense for the first time. It was 37-0 after three.

The final Quarter move much like the third with each side trading small drives until Sylva got the ball with eight minutes left. Saints quarterback Austin Sigsworth handed to Jarvis Carr and he found the hole for a 40 yard run downfield. Sylva Bay made full use and with another quick hand off to Carr scores their touchdown for the final score at 37-7.

Eagles coach Cole Holden offered nothing but praise for his team.

“It’s the best we’ve played,” Holden said. “We practiced hard all week, and played hard tonight. I just can’t say enough about it.”