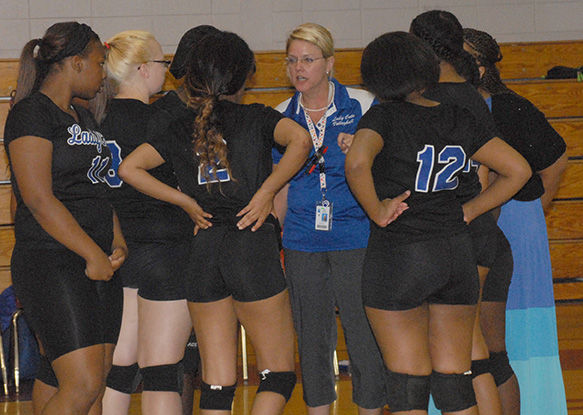 VHS coach Karen Borden said communication was the No. 1 thing that went wrong, along with intimidation.

“They knew where we were coming,” Borden said. “We had played them in summer camp and the tournament, so they knew what they were facing. They’re scared. They’re still scared. They have court fright.”

Varnado (0-10) and Pearl River (8-2) split the match’s opening two points, but with the score tied, 1-1, the Lady Rebels ran off seven straight to make it 8-1. During the spurt, Hannah Johnson posted four aces. VHS broke the serve, and it was 8-2, but Pearl River ran off eight consecutive points and had a 16-2 advantage. Vonshaanae Clark got a point, trimming it to 16-3, but the Lady Cats were unable to put up consecutive points at any point during the first game in the 25-5 loss.

Varnado scored two of the first three points in the second game and took a 2-1 lead, but Pearl River began to take control and put up eight straight points to take a seven-point lead.

VHS got it to 9-3, but the Lady Rebels continued to race toward 25 with a 5-0 run, highlighted by two aces from Abby Mayfield.

The Lady Wildcats got control back on a serve that went out of bounds, but VHS gave it back to PRHS by hitting the serve into the net, and it was 15-4.

Varnado trailed 19-5 when the Lady Cats put up two straight points with Clark getting the second, cutting the deficit to 19-7.

The Lady Wildcats hung tough for the rest of the game as Pearl River outscored VHS 6-4 down the stretch.

The Lady Wildcats hung in a little longer in the third game, as it was 6-3 through the first nine serves, but the Lady Rebels took over after that.

Pearl River scored the next eight points and led 14-6. Varnado kept the margin at eight over the next several serves and was down, 18-10. PRHS made it 24-11.

Lakeysia Peters scored a point to avoid game point, but Pearl River tallied the next score in the 25-12 victory.

Franklinton High School’s Lady Demons had their hands full against a good St. Scholastica Academy team and lost to the... read more