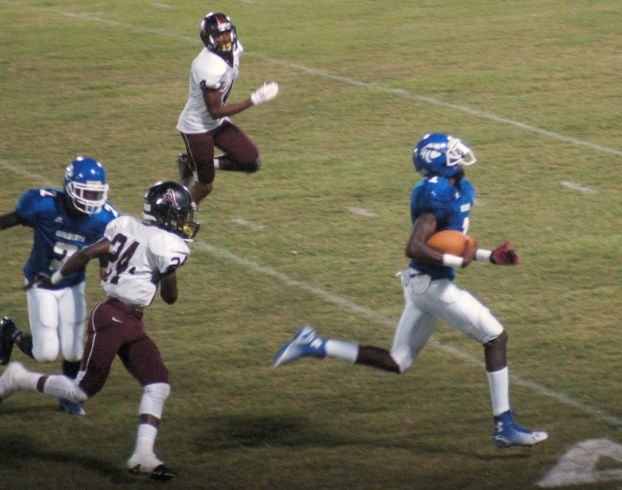 It wasn’t pretty, but the visiting Albany Hornets secured their first win of the season by defeating Varnado, 8-6, on Friday.

Squandered opportunities cost the home standing Wildcats throughout the game.

Varnado head coach Scott Shaffett said his team must step up to the challenge.

“We had opportunities to put points on the board all night,” Shaffett said. “We have got to step up. We had plenty of opportunities inside the red zone. Both teams played hard for four quarters, and the game was a good defensive battle.”

The Wildcats managed only 157 yards rushing and completed only two passes.

Varnado quarterback Delrick Abrams suffered an injury midway through the second quarter as he attempted to haul in a pass from D.J. Jefferson in the end zone. Abrams did not return.

“When you lose a player like Abrams, it’s tough,” Shaffett said. “He is the type of kid who can play everywhere. We had other guys that stepped up and played their tails off. Abrams is the nucleus of our offense.”

Abrams had 72 yards rushing before leaving the game.

The Wildcats (1-3) scored first as Wilbert Gray scampered 2 yards for the score with 4:26 left in the quarter. Gray’s run for the two-point conversion was stopped for no gain.

On the kickoff, the ball rolled dead at the Albany 5. With a mix of running and passing, the Hornets drove down the field to the Varnado 15. On second-and-9, Albany’s Randy Ingram hauled in a 24-yard touchdown pass from quarterback Skylier Lehmann. Cheyenne Labruzza ran up the middle for the 2-point conversion. Albany led 8-6 with 10:36 left before halftime.

Both defenses stiffened and neither offense put points on the board in the second half.

Both teams exchanged possessions. With 8:09 left in the game, the Wildcats took over on their own 35. On the first play, quarterback Jefferson found Darden down the right side for a completion, and Darden raced to the Albany 19. The Hornets (1-3) rose to the occasion, however, and stopped the Wildcats on three straight sacks. On fourth-and-long, Varnado faked the punt and Jefferson completed a pass to Darden to the 15 but could not take advantage of the opportunity.

Albany took over with less than five minutes in the game. The Hornets worked the clock and managed two first downs. Albany was forced to punt with 2:30 left.

Varnado started its last-chance drive at its 15.

Albany ran out the clock to secure its their first victory of the season after thee losses to open the season.

Shaffett said he was pleased with his club’s defensive performance.

“We lost a linebacker last week and lost Abrams tonight. Travon Stokes broke his hand last week and will be out six weeks. Across the board the defense played well,” he continued. “Travon broke his hand. It’s no excuse. Whether they’re on the field or not, we’ve got to step up. We are going to get back like it was the first of the season. The defensive line stepped up and played really well. D.J. did a good job at quarterback. He is a playmaker. We haven’t had many breakaway plays. We have got to finish drives.”

Defensively for Varnado, Desmond Harry had nine tackles. Damon Kirsh and Dearius Parker each finished with seven tackles. Parker had one sack. Blake Fornea had one sack and four tackles.

Pine’s Raiders opened District 7-2A play Friday night with a 42-28 victory over Archbishop Hannan at home. The first half... read more