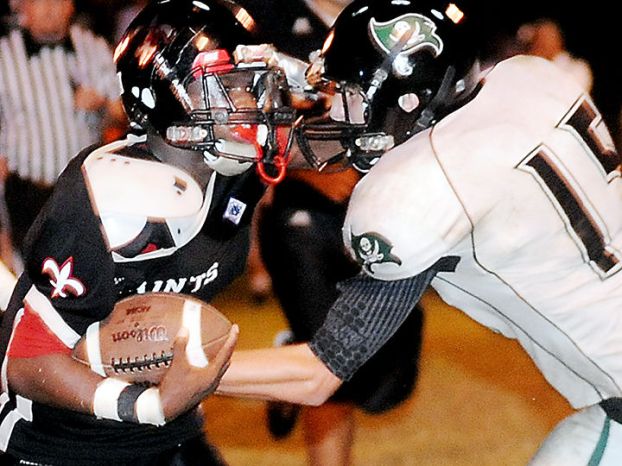 Trinity head coach Zach Rogel told his team before their homecoming game against Bowling Green that he wanted a statement. He got one.

“I think we made a statement to ourselves,” Rogel said. “I think we are ready for any opponent as long as we prepare, believe and play for the man next to us.”

Trinity got off to a bit of a slow start, but once the wheels started turning, there was no stopping them.

The Saints found the end zone on their first drive of the game, with Kevontaye Caston running one in from three yards out, but that was the only scoring in the first quarter.

The Trinity offense found their rhythm in the second quarter, however, scoring 27 points in the quarter.

McCoy finished the day with 4 catches for 111 yards and two touchdowns.

“We made some good throws, and I credit the offensive line and other receivers for blocking for me,” McCoy said.

On the ensuing Bowling Green drive, Caston recovered a fumble and returned it 40 yards for a touchdown, and Trinity began to pull away, 26-0.

“The defense is solid, and they have been all year,” Rogel said. “After the first three or four games, it was a challenge for our offense to help pick up the defense.”

Caston would toss another touchdown pass at the end of the half, this one from 28 yards out, and the Saints took a 34-0 lead into halftime.

Despite the big lead, Rogel didn’t want his team to become complacent, and they didn’t.

Cade Wells scored from 66-yards out after hauling in a pass from Caston, but the play was called back after a penalty. However, Wells would find the end zone when Bowling Green took over on offense, after he intercepted a pitch from the quarterback to the running back.

“I was waiting for that play all night long,” Wells said. “I was hoping they would do it. I was watching his eyes, and as soon as I saw it, I had to go for it.”

That touchdown put the Saints up 41-0 and allowed for some of the younger Trinity players to get some game action.

Bowling Green added a touchdown late in the fourth quarter to prevent the shutout on a 4-yard run from Jace Ball.

Caston led the way for the Saints throwing for 221 yards and three touchdowns, while also adding 44 yards and a touchdown on the ground.

“Your attack is always take what the defense gives you and you want to run your game plan,” Rogel said. “They took away the run and forced us to get it through the air. I always like to establish the run, but sometimes you have to mix it up.”

Bowling Green had some success running the ball, racking up 191 yards, but the Buccaneers had no success in the air, failing to complete a pass and tossing two interceptions. Trinity was able to force four turnovers.

Bowling Green returns to action Friday, as the Buccaneers travel to Centreville for a District 6AA game.