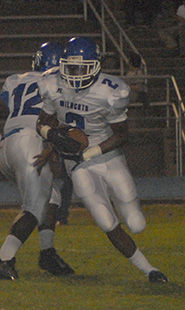 A pair of teams trying to end losing streaks meet tonight in Varnado, as the Wildcats take on Albany at VHS.

Varnado enters this week with a 1-2 record, and the Wildcats are on a two-game losing streak, while Albany is 0-3 this season.

VHS lost to Jewel Sumner 34-0 in a game called because of weather midway through the third quarter.

Varnado’s struggles the last two weeks had been turnovers and getting off to rough starts.

The team has committed eight turnovers in the past two weeks, and has been outscored by a combined 58-6 in the first half of the last two ballgames.

Last week, Nick Darden ran for 33 yards, while Tyrandis Crosby finished with 32 and Delrick Abrams had 24 yards on the ground. Abrams also threw for 35 yards.

When the game was called, Varnado was knocking on the door of the end zone and had a fourth-and-3 at Sumner’s 11.

Defensively, Shaffett said they are not satisfied with the way the unit is playing but said middle linebacker Damon Kirsch stepped it up and had a good ballgame against Sumner.

He also said defensive end Ardale McGowan has been playing well all season.

“He’s playing some really good football right now,” Shaffett said. “He’s playing aggressive, and he’s not taking a break during any of the four quarters.”

For Albany, the Hornets are 0-3 and are 37th in the Class 3A power rankings. The Hornets lost their first game to Thomas Jefferson, 21-20 but have been outscored by a combined 56-6 in the last two weeks against St. Thomas Aquinas and Springfield.

Albany runs a wing-T offense. Coach Blane Westmoreland said the team runs the ball a good amount but is trying to spread it out a little more. Sophomore Skylier Lehmann is the quarterback. Sophomore Cheyenne Labruzza and freshman Kamryn Mayers split time at running back.

Simon Wagespack is the wingback, with Alex Zallo and Danton Cunningham rotating at receiver. The defense is a 4-2-5, with the top players being senior linebackers Luke Callahan and Nathan Harris.