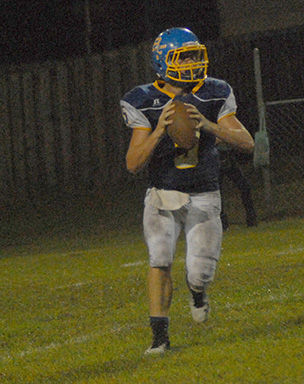 Ben’s Ford Christian School is on the road tonight, facing Heidelberg Academy in a non-district game.

The Eagles begin tonight’s play with a 3-2 record, following their 42-14 District 6AA opening loss to Centreville.

Heidelberg, which is ranked third in Class A by Southern Sports & Travel, is 5-0.

This season, Ben’s Ford is undefeated at home at 3-0, but winless on the road with an 0-2 record.

Last week, the Eagles were trailing Centreville, 21-0, at halftime, but having committed four turnovers.

Running back Aaron Taylor enters this week with 641 rushing yards on 87 carries (7.4 per attempt) and 10 touchdowns.

Quarterback Daniel Pittman is 22-of-48 passing (45.8 completion percentage) for 351 yards, four touchdowns and just one interception. Pittman has also done a good job of running the ball. He’s gone for 206 yards on 42 carries (4.9) and two scores.

Eagles coach Cole Holden said the running game has been good this season.

One of the reasons to run the ball this week is to keep Heidelberg’s offense off the field.

“Heidelberg probably has the most overall team speed we’ve seen,” Holden said. “They’ve got some kids that can run. They are explosive on offense. We’re going to have to play disciplined defense to contain them.”

Heidelberg’s starting quarterback, Michael Davis, is out with a broken thumb, so Caleb Schubert will start.

Coach Mike Taylor said Shubert has done a good job and added that his signal caller can throw it or run it.

The running backs are Darion Milsap and Marlin Griffin. The receivers include Malik Porter, Dontavious Porter is the split end and Caleb Parker is the tight end. Heidelberg’s top defensive players are linebackers Milsap and Nathan Wally.