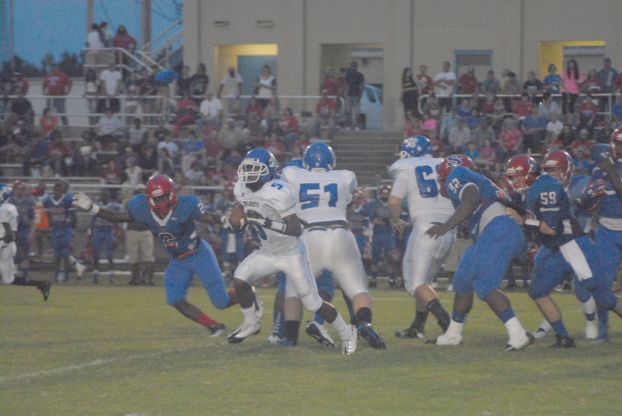 Varnado committed five turnovers, which Jewel Sumner turned into 20 points, as the Wildcats lost to the Cowboys, 34-0, in Thursday’s game at Jewel Sumner.

Two of Varnado’s turnovers were fumble returns for touchdowns.

Coach Scott Shaffett said his team didn’t have any turnovers between the jamboree and week 1 against Dexter.

That helped out in a 20-0 jamboree win over Northlake Christian School, followed by a week one victory, 36-6, over Dexter out of Mississippi.

Over the last two weeks, the Wildcats (1-2) have committed eight turnovers, and have lost 44-20 and 34-0. The three last week against Pine didn’t result in any points, and the Raiders were up 30-0 when VHS’ first turnover occurred, but even when the other team doesn’t score off of them, it keeps your team from scoring and can give your opponent good field position.

“It’s called ball security,” Shaffett said. “Unlike last week, I felt like we showed up and played good ball tonight. Offensively we moved the ball. We got into their red zone on several occasions that could’ve flipped the score to our advantage, but instead, we would fumble the ball. They capitalized on our mistake and turned them into points.”

Shaffett added that his group played well defensively for the most part.

“Our guys are tough and they aren’t going to get down because we lost a game to a very good team because of turnovers. These guys are going to work hard to fix that issue and get back into the win column. They don’t know what quit means. They are dedicated to each other and will come through,” Shaffett said.

The turnover bug hit on the opening kickoff. The Wildcats got a good return but fumbled, and Sumner’s Kevin Coleman recovered for the Cowboys (2-1).

On the drive’s fourth play, quarterback Dakota Stokes snuck in from the 1 for the touchdown. Kenneth Brumfield added the extra point to make it 7-0 at the 10:51 mark of the first quarter.

Varnado began the next drive at its 30 and took it to the seven. On first-and-goal, the snap was fumbled. Derrick Chaisson picked it up and returned it 91 yards for the touchdown. It was 14-0 after Brumfield’s PAT with 6:34 to go.

It stayed a 14-point margin until the second period. The Wildcats punted and Sumner set up shop at its own 42. The drive ended with Stokes once again sneaking in from the one and Brumfield tacking on the point after for a 21-0 advantage.

VHS turned the ball over on downs, and on the drive’s first play, Stokes hit Dion Hart with a quick pass. Hart slipped a tackle and went 41 yards for the touchdown, making it 28-0 after Brumfield was good once again on the extra point.

The rain began coming down toward the middle of halftime. Things got sloppy to begin the second half.

Like Varnado in the first half, the Cowboys fumbled the kickoff to start the second half.

The Wildcats had a golden chance to get on the board with the drive beginning at Sumner’s 30. On second down from the 24, VHS fumbled, and Percy Briggs picked it up at the 16. Briggs then took it the rest of the way up the right sideline and 84 yards for the touchdown. The extra point snap was fumbled, keeping it 34-0 with 10:41 to go.

VHS fumbled the kickoff, and recovered it but could only bring it back to the 11. The Wildcats lost four yards on the first play and then fumbled on second down.

On second-and-goal, Varnado got the ball back when Sumner fumbled. Delrick Abrams scooped it up and raced 76 yards to the Cowboys’ 18.

The Wildcats moved the ball to the 11 and had fourth-and-3, but prior to the play, lightning struck, and the game went into the lightning delay with 6:04 left in the third.

The game was eventually called because of weather with Sumner winning 34-0.

Varnado is back in action Friday, hosting Albany at 7 p.m.