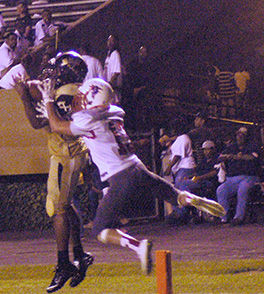 It was the Reginald Roberts and Tymothy Toussaint show Friday night in Bogalusa’s 39-14 win over the Pine Raiders at Lewis V. Murray Jr. Stadium.

Toussaint finished the night with seven receptions for 170 yards, while Roberts passed and ran for 360 total yards. Roberts completed 12-of-19 passes for 221 yards and three touchdowns. He carried 15 times for 139 yards.

Roberts said he was proud of his teammates.

“Tymothy is definitely my go-to guy,” Roberts said. “He was a little hurt last season, but he is back and really making great catches. My offensive line did a great job also.”

Toussaint said his hard work is paying off.

“Every week, I just go out and try to play hard,” Toussaint said. “I just try and stay focused and execute the routes and plays I am supposed to.”

Bogalusa head coach Craig Jones praised his team for a job well done. Bogalusa improved to 1-2 on the season.

“Our offense was clicking tonight,” Jones said. “We still had a few turnovers, but we kept the momentum throughout the game.”

“This was Reginald’s third game,” Jones said. “He didn’t participate in any of the jamborees. He is getting into a good rhythm. He played extremely well tonight.”

Jones said he was proud of his defensive effort.

“This is the second week in a row that we have come out and played good defense,” Jones said. “I want to give a shout out to my defensive coaches for having these guys ready and well prepared.”

The Lumberjacks started on their own 20 after the opening kickoff. On the fourth play from scrimmage, Bogalusa fumbled the handoff. Pine recovered and started its first possession at Bogalusa’s 41. The Raiders’ drive stalled back at their own 40 and punted.

The Lumberjacks began their next drive on their own 30. On first down, Roberts scampered up the middle for 11. On the next play, the Raiders forced another Bogalusa fumble.

Pine could not move the ball against the Bogalusa defense and punted. The Lumberjacks also had to punt and downed the ball on Pine’s 1.

The Raiders moved out to their 26. Then Bogalusa’s Dionte Fernandez stepped in front of a Pine receiver for the interception and raced to Pine’s 24. Following another muffed handoff, the Lumberjacks offense stalled and punted.

The Raiders had possession at their own 26. On second down, Lumberjack Dominique Tillman intercepted Dillon and raced 36 yards for the touchdown. The extra-point failed, but BHS led 6-0 with 3:54 left in the first quarter. The first quarter ended with Bogalusa on top 6-0.

Tillman has intercepted at least one pass in each week this season.

In the second quarter, Pine running back Adarrius Berry scored from 26 yards out and carried Bogalusa defenders with him into the end zone. Pine’s 2-point conversion was successful, and the Raiders led 8-6 with 9:38 to go in the second.

Bogalusa answered on its next possession as Roberts found Toussaint in the back of the end zone for a 17-yard touchdown. The try for two was successful and tied the game at 14-14.

The Roberts and Toussaint connection stuck again with 4:37 left before halftime on a 28-yard touchdown pass reception. The score gave Bogalusa a 20-14 advantage at halftime.

Pine’s Paul Gatusso returned the second half kickoff to his own 42.

On a second down, Fernandez intercepted Dillon’s pass for a pick-six.

The 2-point attempt failed, but Bogalusa extended its lead to 26-14 with 11:01 left in the third quarter.

Following the kickoff, Pine began at its own 35. On the first play, Pine fumbled, and Bogalusa’s Micah Gray recovered. Toussaint hauled in a Roberts pass down to Pine’s 15. The Raider defense stopped the Jacks when Chris Gordon intercepted Roberts and returned it to the Bogalusa 29.

Behind Dillon and Berry, the Raiders moved down the field to Bogalusa’s 16. Once again the Lumberjack defense stiffened, and Tillman intercepted Dillon in the end zone.

Roberts and Toussaint connected once again with 4:48 left in the third quarter on a 48-yard touchdown pass. Bogalusa led 32-14.

Bogalusa’s final score came with 9:28 left in the game. Charles Dyson rumbled in over the middle to seal the 39-14 victory. Bogalusa’s Harlum McGee recovered another Pine fumble late in the game.

Dillon completed 5-of-16 passing attempts for 93 yards and six interceptions. Dillon rushed 11 times for 98 yards to lead the Raiders.