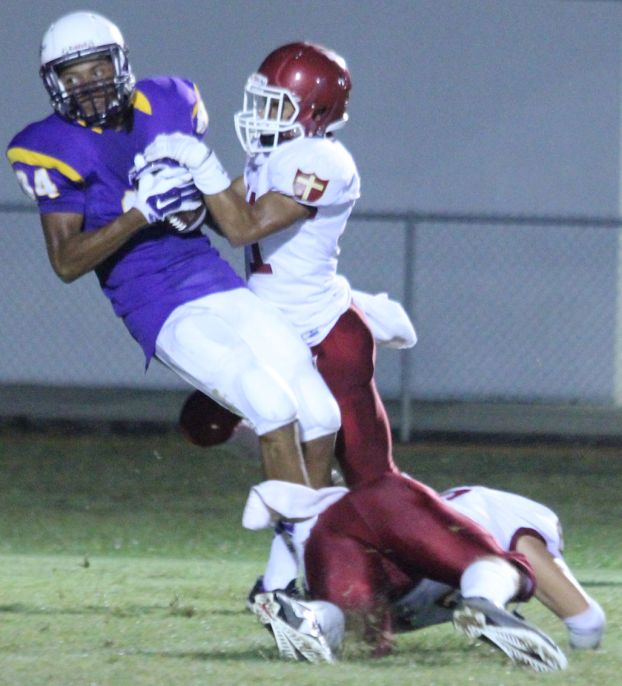 Franklinton got off to a rough start at home Friday night, as Brother Martin scored the first 27 points, and the Demons suffered their first loss this season, 41-20.

The first score was set up by a Demons’ errant snap on a punt. Franklinton (2-1) had a fourth down and lined up to punt from its 36, but the snap was high and over punter Conner Ackerman’s head. Ackerman picked up the loose ball but slipped at the six.

The Crusaders scored in just one play when Jared West ran right and in for the touchdown. Glynn Morere hit the extra point, and it was 7-0 with 10:04 left in the opening period.

The errant snaps were a problem for FHS. The Demons had four errant snaps. One was on an extra point attempt, and the other three combined for 55 lost yards and a lost fumble, which Brother Martin’s Mark Magee recovered.

After the first tally, Franklinton went three-and-out and punted. The Crusaders (3-0) then went 80 yards in nine plays and scored on a one-yard run by Bruce Jordan-Swilling. Jamarian Crain blocked the extra point, keeping it 13-0 at the 5:35 mark

The Crusaders scored just before the end of the first quarter when Jake Broggi hit Irv Smith for a six-yard TD pass. Morere’s PAT was successful, and it was 20-0 with two seconds left.

The score was set up by an 11-yard run from punter Mitchell Boudreaux on a fake punt.

FHS punted in three plays, and then Brother Martin added another score as Broggi hit Smith again, this time for 11 yards. Morere put the PAT through to make it 27-0 with 9:30 left in the half.

Franklinton responded on the next drive. The Demons drove 65 yards in nine plays and capped the drive when Mike Wilson found DeAndre Allen for a 32-yard score. Allen made a leaping catch over a defender, trimming the Crusaders’ lead to 27-6 after an errant snap on the extra point.

Brother Martin countered on its next possession. The Crusaders used three plays to go 53 yards, ending when Broggi competed a 40-yard touchdown pass to Andrew McGuire. Morere was good once again, and it was 34-6 at halftime.

Brother Martin took the second half kickoff at its 35 after the kick went out of bounds. The Crusaders then went 65 yards on 12 plays, all runs, and took 5:23 off of the clock and made it 41-6 with West’s one-yard run and Morere’s PAT.

The Demons drove to the seven, but on third-and-three Franklinton had an errant snap, which Magee recovered for Brother Martin.

Franklinton coach Shane Smith said that when you play in games like this, you have to take advantage of opportunities.

“We had some dropped passes, and we had some missed assignments,” Smith said. “Defensively, they just went right through us, so the bottom line is we were beat and defeated in all three phases tonight, and I take responsibility.”

FHS continued to battle. The Demons cut into the Crusaders’ lead when Tavion Partman took a speed sweep 16 yards to the end zone. The 2-point pass was incomplete, and it remained 41-12.

The game’s final TD occurred with 1:50 left. The Demons drove to the two, and on first-and-goal Wilson finished the drive with a rushing touchdown.

The Demons went for two and the pass was incomplete, but Brother Martin was flagged for pass interference. FHS kept the offense on the field and Azende T. Magee ran in the 2-pointer, reflecting the final score of 41-20.

Renaz Wilson, who left with an injury, finished with 59 yards on 16 carries to go with four catches for 35 yards.

Mike Wilson threw for 167 yards and the touchdown.

Franklinton returns to action Friday with a trip to Bogalusa to battle the Lumberjacks. BHS (1-2) picked up its first win of the season with a 39-14 victory over Pine (2-1).