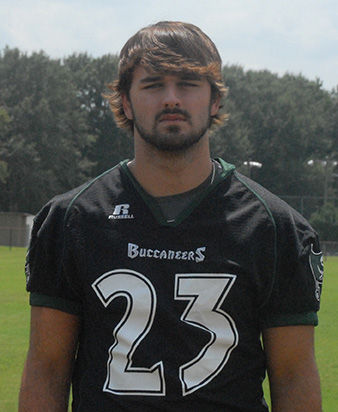 District 6AA play gets under way for Bowling Green and Silliman Institute tonight, as the two compete at Bowling Green.

The Buccaneers begin tonight’s play with a 1-3 record after falling to Brookhaven Academy 29-15.

Bowling Green is off to a tough start this season, having been outscored 126-35.

Last week, the Bucs trailed 15-7 at halftime but tied things up early in the third quarter on a Connor McCain 28-yard run, followed by a 2-point conversion.

“We came back and tied it up in the third quarter, but we couldn’t hold on. We couldn’t stop the pass. We couldn’t get a pass rush.”

Quarterback Brady Goings was good on 8-of-14 passes for 35 yards with an interception. He also ran nine times for 51 yards (5.6 per carry) and a touchdown.

McCain led the Bucs’ rushing attack with 97 yards on 13 attempts (7.4) and the score. McCain also caught two passes for 17 yards.

Currier said Faust is an inside linebacker.

“Matt Pierce is an outside linebacker. He’s got good size, and he’s making a lot of tackles.”

Hayden Thompson returned to the lineup Friday from an injury and made six tackles. Currier said Thompson gave them a spark defensively.

The Wildcats (3-1), who are ranked No. 3 by Southern Sports & Travel on SS&T’s Facebook page, come into this week’s match up after defeating Copiah 28-7.

Silliman’s only loss occurred in the opening week against Oak Forest Academy, 30-6. OFA is 4-0 this season and has defeated both of the teams in this week’s game. They beat Bowling Green in the second week, 49-0.

“We’re a team that brings back a host of seniors, but we’ve also added some new faces,” Silliman coach T.J. Davis said. “We’re still becoming a team and a family. The more we play together, the better we’ll get. The focus is on getting better week-to-week.”

Quarterback Zach Kelly has thrown for 810 yards with 10 touchdowns and four interceptions.

His receivers are Jordan Talley, Tyren Shelton and Caleb Jackson.

The running backs are Keon Brown and Shelton.

“Keon’s our hard-nosed tough runner and Tyren’s like our lightning bolt,” Davis said.

Brown has 138 ground yards with a touchdown to go with six catches for 87 yards and three TDs, while Sheldon has gone for 96 yards and a score.

Davis said the players are doing a good job of taking care of their responsibilities.

This is the final time for more than a month the Bowling Green faithful get to see their team at home.

After tonight, the Bucs don’t host a game until the final regular season game Oct. 24 against Central Private.

Beginning next Friday, Bowling Green plays three on the road against Trinity Sept. 26, Centreville Oct. 3 and Ben’s Ford Oct. 10. The Buccaneers have a bye week Oct. 17.