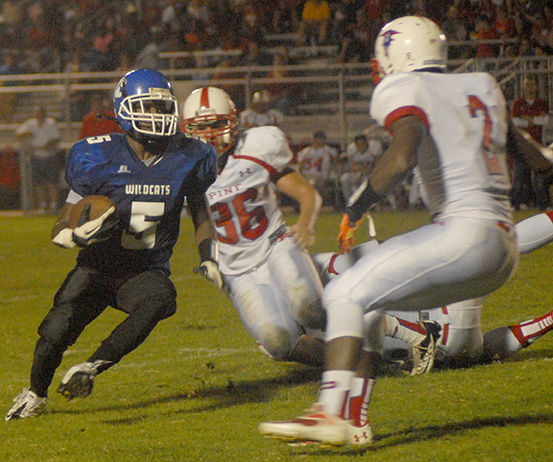 Varnado travels to Jewel Sumner tomorrow for non-district contest in a battle of 1-1 teams, with kickoff set for 7 p.m.

The game was originally scheduled for Friday, but Varnado coach Scott Shaffett said the game was pushed up because of uncontrollable circumstances.

Both teams enter this week following their first loss.

Varnado lost to Pine 44-20 in a game in which they trailed 30-0 early in the second quarter.

“This is a game where we feel we have to regroup, come together,” Shaffett said. “Coming off of a loss, we want to get in the win column and get back to where we were prior to last week.”

Shaffett said Tuesday that his team had a great workout Monday.

“It’s one game,” Shaffett said. “One game doesn’t make a season. We have to get back to doing the little teams. Special teams played well. We had some good plays offensively. Defensively, I thought we played better after the first quarter.”

Last week, the Wildcats scored three touchdowns. The first occurred when J.J. Williams hit D.J. Jefferson for a 13-yard touchdown, which made it 30-6 in the second quarter.

Nick Darden returned a kickoff 82 yards in the third period after Pine went up 38-6.

The final score by the Wildcats was in the fourth quarter when Darden ran 85 yards to pay dirt.

Varnado returns home after this week for a two-game homestand against Albany Sept. 26 and Pearl River Oct. 3.