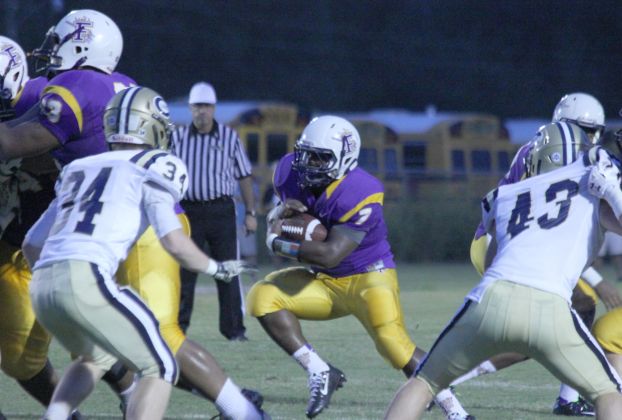 It took more than 48 minutes, but the Franklinton Demons advanced to 2-0 with a 28-27 victory over the Covington Lions Friday night at Demons’ Stadium.

With the game tied at 21-21 at the end of four quarters, Covington got the first chance to score and did so on a 15-yard pass from junior quarterback Tyler Smith to sophomore receiver Alonjai Earlycutt. Senior kicker Ian Connelly failed to convert on the PAT despite having two attempts because of a penalty on Franklinton, leaving the score 27-21 in favor of the Lions.The Demons answered on their chance starting at the 10-yard line. Quarterback Michael Wilson connected with Chandler Davis on a nine-yard toss to tie the score. Senior kicker Conner Ackerman then booted what appeared to be the game-winning extra point, but just as Connelly got two chances, Ackerman had the same because Covington was offsides and the play was blown dead. No one realized, however, and a penalty was called on the Demons, one of 15 on the night for 129 yards, this one being for storming the field in what they thought was the winning kick, thus causing the PAT attempt to be backed up to the 23-yard line. Ackerman came through once again, and the game ended with Franklinton dropping the Lions to 1-1.

“I’m speechless,” Ackerman said. “What can I say? It feels great, but without Mike and Chandler I wouldn’t have had the chance to do this.”

Franklinton started the game with Renaz Wilson, who rushed for three scores and 190 yards on 26 totes, bulling over from six yards out to put the Demons on the scoreboard four minutes into the contest.

Less than two minutes later, Franklinton defensive back Percy Briggs picked off Smith, setting up his Demons at the Lions’ 20, and three runs later, all from Renaz Wilson, the final one coming from three yards away to put Franklinton up 14-0 with both of Ackerman’s kicks.

Covington tallied its first touchdown as George Brister intercepted Mike Wilson, and returned the pick six 60 yards for a score. Connelly tacked on the extra point the score was 14-7. It remained that way through the second and third quarters.

Freshmen Devin Brumfield, who led the Lions ground game with 126 yards on 31 carries, scored on a four-yard run set up by Isaiah Carter’s fumble recovery at Franklinton’s 19-yard line to knot the score at 14-14 at the start of the final period.

Renaz Wilson garnered his final touchdown on a seven-yard burst two minutes into the fourth stanza to put the Demons back in front 21-14 with Ackerman’s boot.

With just under four minutes left in the matchup, Tyson Blanks brought the game back into a tie, 21-21, with a four-yard run coupled with Connelly’s PAT, and that is where the game ended in regulation until FHS outscored Covington 7-6 in overtime for the win.

One area of concern for FHS coach Shane Smith was the penalties.

“I am concerned about our offense. We committed too many penalties and turnovers, Smith said. “Our defense kept us in the game but we can’t keep putting ourselves in situations because of our lack of execution.”

The Demons host Brother Martin Friday in going for 3-0.