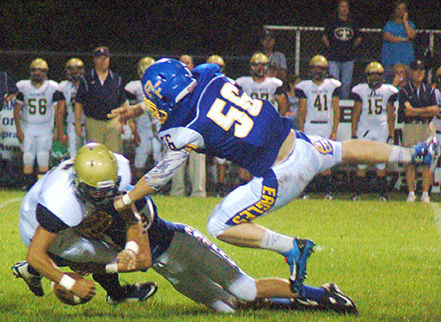 In a game that featured a 30-minute lightning delay with 6:45 left in the second quarter and a plethora of penalty flags in the second half, the Ben’s Ford Eagles topped visiting Prentiss Christian 32-20 on Friday.

The Eagles improved to 3-1 overall on the season.

The game took three hours and 45 minutes. In all, there were 31 penalties for 276 yards between the two teams, and a player from each team was ejected.

“I thought coming in we had to find a way to stop the run and figure out a way to run the football,” Holden said. “I think we did both tonight. Defensively, we played as a unit.”

The Eagles’ defense was relentless all night and was led by Cole Williams and Shelby Culpepper. Williams said he felt good about his performance.

“We came out and jumped on them early,” Williams said. “I thought the team as a whole played well. We came out aggressive on defense and never let up.”

Offensively, running back Aaron Taylor, who came in off a 202-yard rushing effort the previous week, carried 23 times for 161 yards and two touchdowns Friday.

Taylor said he credited his teammates for his success.

“I came out tonight knowing we had to do whatever we had to do to beat Prentiss,” Taylor said. “I trust my team and I know they are behind me. The O-line did an awesome job.”

“Aaron is what you call a workhorse,” Holden said. “He is playing really good right now. He deserves it.”

The Saints defense held and took over on their own 31. After a facemask penalty on the Eagles, the Saints’ offense began going in reverse. On third-and-20 from his own 31, Saints quarterback Tanner Hathorn completed a pass to Blaise Holder to the Eagles 27. The Eagles’ defense was called for holding an gave the Saints possession at the eight. Two plays later, Saints running back Austin Daughdrill scooted up the middle for the touchdown at the 7:04 mark of the opening quarter.

Ben’s Ford started work at its 32. On first down, Pittman kept for 6 yards to the Saints 38. On second and three, Taylor scampered around the left side on a reverse breaking tackles and found end zone to tie the game at six with 6:07 left in the first quarter. Destin Pittman added the point-after-touchdown conversion kick for a 7-6 lead.

With neither offense able to move the ball on their next possessions, Ben’s Ford took the football following a punt and started on their 38. The Eagles had first and goal on the PCS 4. On third and goal, Pittman fumbled in the end zone after a hard hit before he reached the goal line. The Saints recovered to stop the threat with 9:15 left in the second quarter.

Ben’s Ford’s next score came with 6:45 left in the second quarter. Pittman kept and ran up the middle untouched for the score. The Eagles led 14-6 as the game was stopped in a lightening delay.

After play resumed close to 9 p.m., Pittman scored again from the 1 for a 20-6 advantage with 3:20 left before halftime.

With 5:09 left in the third quarter, Pittman found the end zone again from 4 yards out. Eagles led 26-12 after the PAT failed.

Prentiss Christian started on its 32. On first down, Gaitan hit Hathorn from behind knocking the ball loose. Culpepper recovered for the Eagles.

With second-and-goal from the 5, Taylor scored. The 2-point conversion pass failed, but the hosts led 32-12.

At 9:59 of the final quarter, the Saints completed a 19-yard pass to Peyton Dungan for a touchdown. Blake Greenlee ran in for the 2-point conversion.

The Eagles committed 18 penalties in the game. Holden said that was something that needed to be corrected.

“Physically we played great, hard-nosed football, “Holden said. “We had way too many mistakes, penalties and turnovers.”

Pittman carried 19 times for 75 yards and three touchdowns. He completed 3-of-7 passes for 68 yards.

“Daniel gets better every week,” Holden said. “He gives us a run or pass option.”

The Eagles had 18 penalties for 166 yards, including one ejection. Prentiss Christian had 13 penalties for 101 yards and also had one player ejected.

Ben’s Ford defensive players Josh Moss and Josh Crain each had an interception.

Holden said his team will be ready for the task.

“Centreville traditionally has got a great program,” Holden said. “I think it’s going to be a tough game.”

Taylor and Williams both agreed beating Centreville won’t be easy.

“We have got to come back Monday and be ready to work,” Taylor said. “They are a good football team.”

“We have got to play as aggressive on Friday as we did tonight,” Williams said. “They have a good team. We are looking forward to playing them.”