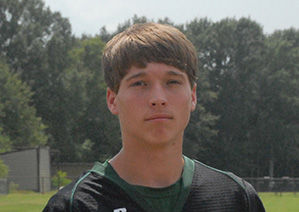 Hickman completed 20-of-28 passes to six different Cougars receivers, including senior running back Connor Dorman, who took two of them (49, 8) to the house. Dorman finished with 131 total yards.

Junior halfback Carter Culbertson picked up a first quarter touchdown when he took the handoff from Hickman and plunged in from one yard out. King was knocked out at the goalline on the previous play on a 20-yard completion.

The Cougars racked up 352 total yards, 259 through the air, and again showed the ability to shut down an offense by getting pressure with the front seven. Seniors Garrett Pace, Michael Fiorella, Joey Rushing and junior J.T. Cline had 27.5 combined tackles including seven tackles for loss. All four had several quarterback hurries during the game. Pace picked off a deflected Bucs’ pass near midfield, which the offense quickly turned into a score.

Connor McCain scored on a 28-yard TD rush with 9:37 left in the third and the Bucs converted the 2-point conversion to tie it 15-15.

Brookhaven outscored Bowling Green 14-0 for the rest of the period and neither team tallied in the fourth period in Brookhaven’s 29-15 victory.

Goings hit on 8-of-14 passing for 35 yards with an interception, while running for 51 yards on nine carries. McCain ran for 97 yards on 13 attempts and caught two passes for 17 yards.

Bowling Green is back in action Friday, hosting Silliman Institute in the District 6AA opener.

The contest is Bowling Green’s final home game until the last game of the regular season, which is Oct. 24.

Oct. 17 is a bye week before returning home to face Central Private.

Pine leads in every game but falls to Pearl River