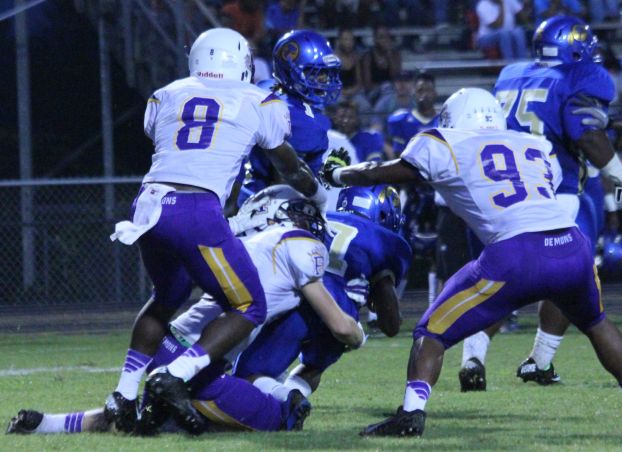 Franklinton’s Demons open the home portion of their schedule tonight against the Covington Lions.

Both teams enter this week with 1-0 records.

Franklinton recorded a 20-12 come from behind victory over Tylertown of Mississippi.

Franklinton is ranked fifth in Class 4A in the Louisiana Sports Writers Association poll.

The clubs played opposite type of games to capture their wins.

FHS trailed 12-0 at halftime before cutting the lead in half at 12-6 and then the Demons scored twice in the fourth period for the win.

Covington jumped out to a 24-0 lead on Holy Cross before the Tigers made it 24-7. Holy Cross then forced a pair of turnovers, which led to two touchdowns for the Tigers.

Both teams went deep into the playoffs last year.

FHS was a Class 4A quarterfinalist, while

Covington was just a point away from going to the finals in a Class 5A 28-27 semifinal loss.

Last week, Franklinton’s offense did pretty well. Quarterback Mike Wilson was 14-for-18 passing for 251 yards and a touchdown to Azende T. Magee, who finished with five catches for 79 yards.

Magee also had four rushing attempts for 61 yards and a 2-point conversion.

Renaz Wilson ran for 50 yards on 14 carries and two touchdowns.

One of the areas Demons coach Shane Smith wants cleaned up is turnovers. Smith said the team has committed six turnovers, three each in the jamboree against Mandeville and last week. He said the team is minus five in the turnover ratio in the last two weeks.

“That’ll catch up to you eventually,” Smith said. “We also need to do a better job of defending the run. Having some guys back will help out with that. The kicking game also has to improve.”

Switching to Covington, the Lions are under the direction of coach Greg Salter.

“They are athletic and they are aggressive,” Salter said.

“They have a new quarterback (Mike Wilson). He’s one of those guys that has a good skill set. Being a first year starter, he’ll continue to get better. He’s going to be getting more comfortable. Defensively, they do everything you would want your defense to do. They are aggressive, physical and they get 11 hats to the ball.”

The Lions are running a spread offense with Tyler Smith at quarterback. Last week, he threw for 88 and ran for 75.

Salter said his team will be without starting running back Joshua Bickham this week because of an off the field incident.

“I think he’s a young man that physically is capable of helping right now,” Salter said.

“You don’t get many freshmen who are 5-10, 195 pounds. He’s a good football player. He’s going to be a special special player for us.”

The top returners are senior linebackers Isaiah Carter and Levi Friend. Both of them split time last season.

FHS completes the two-game homestand next Friday when they host Brother Martin.