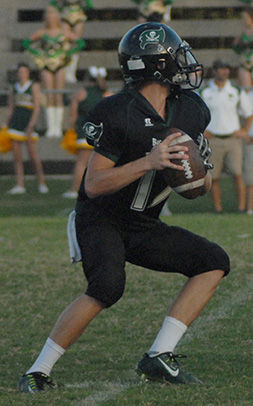 Bowling Green takes to the road tonight, and for the second straight week, the Buccaneers face a winless team in Brookhaven Academy.

These two teams were involved in one-point games last week.

Four of the five combined losses have occurred against teams that have a winning record and three of them are 3-0.

The two losses by the Bucs are against clubs that are a combined 6-0, while the teams have won against Brookhaven have a combined 6-3 mark.

This week, Bowling Green could get middle linebacker Hayden Thompson back.

Quarterback Brady Goings completed 9-of-20 passes for 110 yards and he threw two picks last week, while running 11 times for 21 yards.

Connor McCain, who plays a lot of different positions, finished with 94 rushing yards and a touchdown and he caught 74 yards of passes. McCain had a rushing and receiving touchdown. He also made four tackles defensively and he intercepted a pass.

Defensively, Currier said the line was a big key to last week’s win. The line consists of ends Chris Waskom and Darren Lockhart, along with tackles Drake Spears, Brandon McElveen and Levi Tarver.

“I think we played well defensively against the run,” Currier said. That was biggest key defensively. We stopped the run and controlled the line of scrimmage.”

One of the areas Currier wants to see his club improve is on pass defense and he said it’s got to happen this week because Brookhaven likes to throw the football.

“The quarterback seems accurate,” Currier said. “They like to spread it around and throw it about 50 percent of the time. We haven’t seen a passing team yet, so that’s a concern. We’ve just got to step up, keep everything in front of us, not get beat, and make the tackles.”

Senior Heath Hickman is the quarterback.

Purvis said Hickman completed passes to 5-or-6 receivers last week and that the team rotates about eight different receivers.

The running back is Connor Doorman.

Defensively, they base out of a four-man front and Purvis said they were pretty balanced on the tackles last week. He said 15 guys made tackles in last week’s contest.

“We don’t have just one guy that gets all of our tackles,” Purvis said. “We play several different linebackers. We rotate four guys up front. We’re pretty balanced defensively.”

One area Purvis wants to see his team improve is penalties and turnovers. Brookhaven was flagged for 80 yards last week.

“We’ve got to cut down on turnovers,” Purvis said. “We had two big turnovers last week that cost us. We also had a lot of penalties that hurt us. We had 485 yards of total offense and only 20 points.”

Bowling Green returns home next Friday to open District 6AA play against Silliman Institute. It’ll be the Bucs’ last home game until the final regular season, which is Oct. 24 against Central Private. In between are three road games and a bye week.

Bogalusa hits the road to take on West St. John