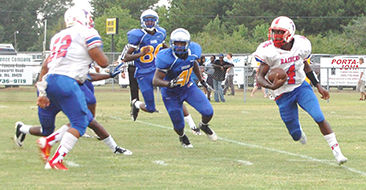 Pine and Varnado were victorious in the Varnado Jamboree, which took place Thursday.

With time running out in the first quarter, Dillon scampered 75 yards for a touchdown from what appeared to be a busted play. Dillon put his Raiders up 16-0.

Pine coach Bradley Seal said that is just what Dillon does.

Pine’s first score came with 11:09 left in the first quarter on a 2-yard run by junior Adarrius Berry. The two-point conversion was good and it was 8-0.

Senior Tory Robinson gave Pine a 16-0 lead on a touchdown run with 7:01 remaining in the first quarter.

With the Raiders leading 22-0, it seemed the game was in their control, but East Feliciana found some energy.

On the kickoff by East Feliciana, Pine fumbled and the Tigers recovered. On the very first play scrimmage, Tigers quarterback Kavon Moore found Ryan Nero for the score. Pine led 22-8.

Seal was not happy with his team’s performance.

“We just played sloppy, especially on offense,” Seal said. “The defense did a nice job coming up and stopping the run.”

Seal said a couple of guys were banged up following the game, but nothing serious.

Pine opens the season at home Sept. 5 against Pearl River on Friday.

“They have a new coach (Paul Beebe), so don’t know really what to expect right now,” Seal said. “Right now, we just have to focus on getting our mistakes fixed and taken care of.”

The Varnado Wildcats faithful had much to cheer about in Thursday night’s jamboree as the Wildcats rolled to a 20-0 victory over the Northlake Christian School in a contest that took two hours and 40 minutes to complete.

“I told the team that I knew if we kept down the mistakes and penalties when we looked at the scoreboard, it would be in our favor,” Shaffett said. “It was great to win 20-0 and just great to win period. I was also impressed with our discipline throughout the game.”

The Wildcat defense bent but never broke in the game. It was tough yardage all night for the Wolverines.

The Wildcats got on the board with 5:13 to go in the first quarter. Junior quarterback Delrick Abrams found D.J. Jefferson in the back of the end zone for the 4-yard touchdown pass. The two-point conversion failed.

After the kickoff, the Wolverines found themselves facing fourth-and-20 and sent the punting unit onto the field.

With 3:05 remaining in the first quarter, the Wildcats started on their own 46. The Wolverine defenses found a spark. On second-and-14, Abrams was intercepted by Josh Landry.

On the first play from scrimmage, Varnado’s Dearius Parker recovered a Wolverines fumble.

The Wildcats led 6-0 at halftime.

Northlake Christian had possession starting the second half. The Wolverines had fourth-and-inches for a first down when Varnado’s Wilbert Gray stopped Miguel Black for no gain.

The Wildcats started on their own 41. It took the hosts just two plays to score as Abrams scampered 37 yards for another Varnado score. Nick Parker added the two-point conversion and the Wildcats led 14-0 with eight minutes left.

With 1:58 remaining, Abrams ran for his second rushing touchdown. The two-point conversion failed.

“This was a great win for us tonight,” Shaffett said. “Northlake Christian School is a good football team. They are doing phenomenal things over there. They had nine wins last season and made a run for a state championship. I am just proud of the guys and the win.”

Abrams finished 3-of-3 passing for 20 yards and a touchdown. He rushed 3 times for 50 yards and two scores. Varnado’s Tyrandis Crosby had one carry for 28 yards. Darden rushed four times for 20 yards. Gray had two carries for 18 yards.

Jefferson had two receptions for 17 yards.

Defensively, Parker had a fumble recovery and Gray registered a sack.

Varnado opens the regular season on Sept. 5 hosting the Dexter Bulldogs from Mississippi.

Bowling Green hits the road for the first time this season