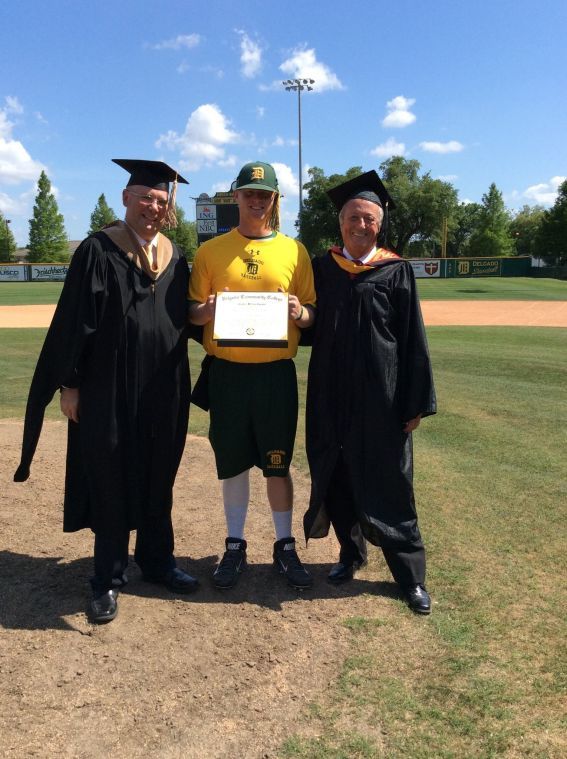 Delgado Community College has made it to the Division I NJCAA World Series after capturing the 2014 South Central District Championship last weekend in Neosho, Mo.
The Dolphins went 3-1 in the double-elimination event.
It is the third time 2011 Franklinton graduate Clay Tageant has been part of a World Series team. His first two were when he was at LSU Eunice the year he was redshirted and then as a redshirt freshman.
LSU Eunice won the World Series in 2012.
“I’ve been on some good teams. It’s awesome,” Tageant said. “The Lord has blessed me with some great coaches, teammates and opportunities. There are people that are on this team, who are going for the first time and there are some who never get to go. To have the chance to go three times is awesome.”
Delgado played two games last Friday and needed just three pitchers for the two games.
The Dolphins won the first game 4-3.
Tageant got the win in relief of Chase Hymel, who was solid. Hymel allowed three runs (two earned) on seven hits with nine strikeouts and four walks.
Tageant pitched the top of the ninth with the game tied 3-3.
It was Tageant’s first appearance since April 22 when he started against Faulkner State and threw five innings of three run, eight hit, three-strikeout ball in a no decision.
Tageant said it was a big situation.
“The warm-up pitches were all high when I came in,” Tageant said. “(Catcher) Chris (Eades) threw the ball down the second and I was like, ‘alright, it’s time to get it together and figure it out.’”
And he did. Tageant got the first guy to groundout to him before recording a fly out and then a groundout to short to end the three-up, three-down frame.
“That put some momentum in our dugout and we scored the game-winning run in the bottom of the ninth,” Tageant said.
Cole Freeman started the game-winning rally with a one-out walk. After the second out, Freeman stole second and scored when Cody Ducote singled to left for the walk-off victory.
Later on that day, the Dolphins stayed in the winner’s bracket with a 3-2 win over Crowder College behind a complete game effort by Brooks Vial, who allowed one earned run on nine hits with seven strikeouts and two walks.
That put Delgado in a position where they had to be defeated twice in order to be eliminated, but only needed one win to get to the World Series.
Delgado suffered its only loss Saturday 7-3 to Seminole State.
Tageant threw an inning, allowing two runs (none earned) on four hits with a walk in middle relief.
That set up a win or go home game for both teams.
Delgado jumped up 1-0 when Eades singled home Ducote. Seminole tied it 1-1 after two. The Dolphins broke the tie with Austin Barrios singled Ducote to the plate.
Seminole State came back with three in the third to make it 4-2, but Delgado responded with three of its own in the fourth.
Bryce pulled the Dolphins to 4-3 with an infield single to shortstop, scoring Troy Lewis before Rivers Frederick doubled Lewis home to tie it 4-4. Josh Watkins then singled to right, plating Adams and it was 5-4 through four.
After that, the Dolphins never looked back. They added two insurance runs in the sixth and they needed them, as Seminole State played one each in the seventh and eighth, but got no closer and the Dolphins had punched their ticket to the World Series.
Delgado is in Grand Junction, Colo., preparing to open up tomorrow against Chattahoochee Valley at 9:30 p.m. central time.
For Tageant, this season, the redshirt sophomore is 6-0 with a 5.46 earned run average over 13 games, which includes three starts, covering 29.2 innings. Tageant has struck out 17 and walked eight.
Off of the field, Tageant has also hit the books. This was the third straight semester for Tageant where he’s had a 4.0 grade point average. Tageant is also a member of Phi Theta Kappa Honor Society.
“As I’m in the recruiting process for D-I, they see that transcript and it helps. It was something my parents stressed in me. I need to take care of business off of the field, as well as on the field. They told me I had to be the best person off of the field and I think it reflects in my actions,” Tageant said.
Tageant received his Associate Degree in General Studies from Delgado in a ceremony at Kirsch Rooney Stadium’s pitcher’s mound. Tageant and the other seven sophomore baseball players missed the spring Commencement ceremony Tuesday because of preparations for the JUCO World Series, so college brought it to them. The diplomas were conferred by Delgado Vice Chancellor for Academic Affairs Harold Gaspard and Vice Chancellor for Institutional Advancement Dr. Stanton McNeely.
His general studies degree will transfer to a four-year university where he will pursue a degree in history education.