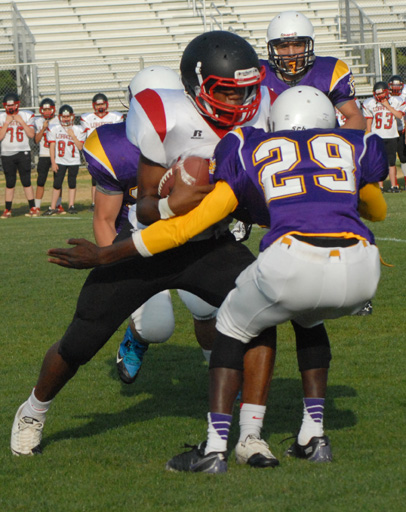 Franklinton played well on both sides of the ball during Friday’s spring game against Loranger at home.

Things began with the second teamers out there for a pair of eight-play series.

Franklinton began on defense and started in style. The Demons recovered a fumble on the first two plays with Casey Riley and Jordan Barnes both having a fumble recovery.

The second team offense took the field and Tajh Magee hooked up with Jymon Jenkins and then he ran for 13 yards.

The kickers were next and attempted two extra points, followed by a 32-yarder from both hashmarks and the middle of the field.

The first teamers got their chance next with two sets of 10 plays.

Franklinton’s defense went first and except for a few plays, the Demons were stout throughout. Cornerback Josh Magee and linebacker Justin Alford each intercepted two passes for the entire spring game. Alford brought one his picks back about 85 yards for a touchdown.

Franklinton coach Shane Smith said the secondary is strong and praised his defense.

The second set of plays for the firsts had Dalton Talley and Devin Elzie combine on a sack.

FHS’ offense got a spark on its second possession from running back Azende T. Magee, who had a 70-yard touchdown run.

Magee was tough on Loranger’s defense throughout.

“I thought Azende played well and we expect nothing but that from him,” Smith said. “Last year, he was a starter and did a great job for us. This spring, we saw him kind of assert him a few times with Renaz (Wilson) out at tailback (shoulder). Man, he’s got that ability to make a play at any time. I don’t know how many yards he had on how many touches, but it was a pretty good average.”

The second stringers got back in there for a 10 play series offensively and defensively. The teams then went into goal line work with both clubs getting four plays from the 10.

Then each team did three series like you would in a game situation before the spring game wrapped up with a 12-minute quarter.

The Wolves began with possession and on third down, Damien Dawson set the Demons up with good field position by recovering a fumble. FHS took advantage quickly, as Mike Wilson hit D’Andre Allen for a 39-yard score. Connor Ackerman, who made all three extra points in the period, hit the extra point to make it 7-0 with 10:41 remaining.

Neither team scored on its next possession. Loranger took over at its 29. The Wolves moved it to the 41 with a 12-yard pass and then picked up 39 yards on a running play. On first down from FHS’ 20, the Wolves attempted to pass, but Alford intercepted it and brought it back about 85 yards for the touchdown. Ackerman added the PAT to make it 14-0 with seven minutes left.

FHS scored the final points with under a minute remaining on Azende T. Magee’s two-yard run and Ackerman’s extra point made it 21-0.

Franklinton enters this season after a 10-3 year that saw the Demons reach the quarterfinal round of the Class 4A playoffs, as the seventh seed. FHS lost to eventual state runner up second seeded Edna Karr 26-0. Loranger made the regional round but lost to fourth seeded Patterson, 16-14.쇓